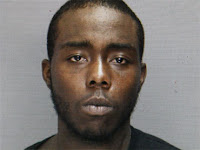 PA. MOM OF THE YEAR GETS 15 FOR KILLING FBI AGENT 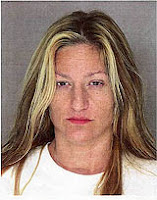 Like many molls in the criminal sorority, Christina Korbe, 42, was gonna stand by her man. And when the feds raided a rural Pittsburgh area farm on a drug warrant for her hubby, Robert 'Bobby' Korbe, this dim-witted mama took exception. Even as the walls closed in, the pretty blonde she was full of blame for everyone--but herself.
On Tuesday she pleaded guilty to fatally shooting FBI Special Agent Samuel Hicks on Nov. 19, 2008. She was sentenced to 15 years and 10 months in prison after she copped to manslaughter and weapons.


"Had Robert Korbe simply opened the door and surrendered that morning, none of us would be here today," U.S. District Judge Terrence McVerry said Tuesday.

Instead, Korbe cursed at agents trying to open his door with a battering ram, then ran to the basement to flush his stash of cocaine down the drain before fleeing out back where he was arrested.  That left Christina alone with their two children, then 10 and 5. More in the Pittsburgh Trib

Posted by Crime Scene USA at 5:19 PM No comments:

The winter of 2010-11 is turning into a deadly killing zone for America's law enforcement personnel.
Just days after New Jersey police officer Christopher Matlosz was shot execution-style by a dim-witted robbery suspect, Officer Larry Nehasil of the Livonia Police intelligence unit was shot and killed while interrupting a heist at a local home. The 48-year-old 20-year vet had been tracking bandits wanted in a string of B & Es. A suspect was also shot and killed. Nehasil, who was married with two children, had a strong work ethic and an ever-present smile, Police Chief Robert Stevenson said.
Elsewhere, peace officers have been killed in Ohio and Toronto. Nehasil was killed after being shot while interrupting a burglary at a home in Walled Lake — the first officer in Livonia's history to die while investigating the commission of a felony. More from The Detroit News

"The Livonia Police Department has suffered a terrible loss," said Police Chief Robert Stevenson. "He's going to be sorely missed by our department."