NFL LEGEND Terrell Owens is a deadbeat dad and now there's a warrant out for his arrest after he failed to show up for a court date regarding child support payments.
The wide receiving live wire, whose as well known for his off field antics as for his on field celebrations was supposed to show up on October 24.
But according to his spokesperson Diana Bianchini, the free-agent  was a no show because he had set up a televised workout in the hopes of securing a new contract. No teams attended.
She added that he had tried to reschedule his Oct. 24 hearing at the Contra Costa County Court. 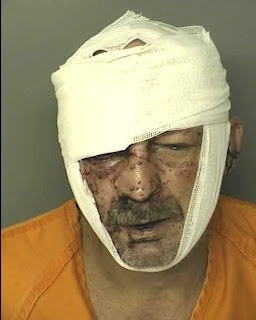 SO PATHETIC. Here he is bandaged up like he's had the shit pounded out of him. Wearing prison orange. But he might be a really nice guy. Or not.
Posted by Crime Scene USA at 6:37 AM No comments:

THE WIFE of a former prison warden who shacked up with a convicted killer after helping him escape has been sentenced to just a year in prison.
Bobbi Parker, now 49, fell for Franklin Dial while she was running a prison pottery program at the Oklahoma State Reformatory in 1994, where her husband was in charge.

THE CREEPY subway pervert who got a beat down from his victim, who then snapped a pic of him on her blackberry has been turned in by his brother.
As we reported here 22-year-old Shyane DeJesus was less than impressed when the man sidled up to her at Manhattan's Union Square Station and began rubbing himself on her thigh.

A FURIOUS wife threatened to 'blow up 10 planes' because she hated her husband working nights, cops say.
None too bright Soraya Evette Billinge was allegedly furious about her husbands hours, so she called officers at the the South West Florida International Airport in Fort Myers from her cell phone.
She allegedly told officers that she didn't want her husband working late at night because she did not like being home alone.
According to the dispatcher, Billinge became frustrated that the police could not help her with her husband's schedule, the police report said.
But when she didn't get the help she wanted, she is accused of saying: "Okay I blow up, I blow up ten planes" before hanging up. 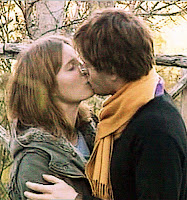 A MURDER can really screw up a relationship. Just ask onetime kinky lovebirds Amanda Knox and Raffaele Sollecito whose torrid sex games may have led to murder. The couple were recently (and dubiously) acquitted of murdering Knox's British roommate during a botched sex game. But now, Mama Mia!, the Italian Stallion says they'rea quitsa.
He said: "It's all over between us. I still have a great affection towards her but 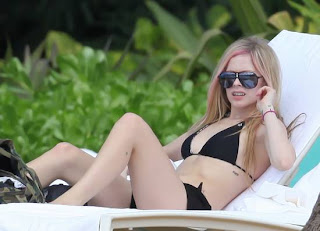 WE DON'T think the perps are Sk8r Bois. Only surly 'punk' princess Avril Lavigne knows for sure. According to TMZ, the singer was involved in a brawl outside Hollywoods's Roosevelt Hotel early Sunday. Her beau Brody 'Bromance' Jenner was slugged in the head with a bottle when he tried to break it up. On Twitter, Avril said: “I don’t fight. I don’t believe in it. To clear things up I got attacked by 5 people last night out of nowhere. Not cool. My face is f**ked.  As in black eye, bloody nose, hair ripped out, scratches, bruises and cuts. So not ok to be abusive to others. Violence is NEVER the answer.” MORE ON AVRIL'S NIGHTMARE FROM TMZ
Posted by Crime Scene USA at 12:01 AM No comments: