MEET the worst people in America. Who, you ask? Why, it's Amanda Joliff and her beau Richard Smith. Seems Amanda's 14-year-old son has been locked up for three years in a dirty, mouse infested trailer. The lad only escaped when his mom decided to take a trip to New York.
The boy, whose loving mother was called him "developmentally delayed," was found hiding under a neighbor's porch Sept. 27 in Erie, Colo., after his mother and her boyfriend left for the Big Apple.
Cops say she returned and told cops that a lock found on the plywood door to the boy's room was installed because he had once run away. Sure. OK. BAD MOM

Posted by Crime Scene USA at 11:35 AM No comments: 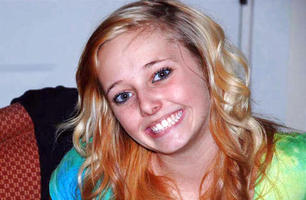 THE search for a 16-year-old Utah teen has ended in heartache. Fingerprint and dental records reveal that a body found Tuesday is that of Alexis Rasmussen, who vanished Sept. 10.  The police said in a statement:"This is certainly not the outcome we were hoping for. All indications are that Alexis was a very outgoing and loving person." Cops have not revealed how the pretty teen died and so far haven't not indicated if there are any suspects--nor have they even said whether it's a homicide.
Cops say Alexis was last seen when she was babysitting Sept. 10. That night she left before midnight to meet a friend.
MORE ON ALEXIS RASMUSSEN MYSTERY
Posted by Crime Scene USA at 11:22 AM No comments:

MUGSHOT MANIA! IS HE SLEEPING OR IS HE DEAD? 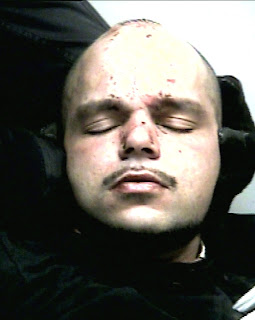 SHHHH. This Anton LeVay impersonator is about a week too early for the big day. Or we could be wrong... maybe he's just meditating. Or maybe he's got a brutal head and is just screwed.
Posted by Crime Scene USA at 11:09 AM No comments: