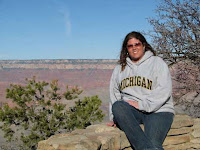 COPS IN Michigan are investigating the suspicious death of pregnant Jenny Webb, 32, whose body was found near a private gun range east of Saginaw. The range is frequently used by cops. Jenny was near the end of her pregnancy term, officials said and was increasingly excited to be a mom. Now, it gets murky... the death is being investigated by the State Police--who do probes when a cop is involved in a death. All very cryptic...
Township Police Chief Brian Booker said: "I thought it best that the Michigan State Police investigate this situation. The prosecutor has

AHH, Labor Day. The traditional end of summer in the U.S. and Canada. Used to be, there were a lot more Labor Day parades. You know, when the average wage was livable. People had good benefits and there wasn't such a despairing gap between the really rich and the rest of us. Well, Crime Scene USA remembers and as a result we will be doing that light posting thing. Have a great holiday and see you Tuesday.
Posted by Crime Scene USA at 8:19 AM No comments: 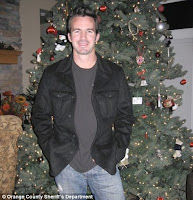 A CALIFORNIA high-flier who didn't want to buy out his business partner instead murdered him and then posed as the dead man, telling his family he was e-mailing from Africa.
Cops say Christopher Smith and Edward Shin were business partners in an advertising company called 800xchange. A falling out between the two led to an agreement that Shin, 33, would buy out Smith's portion of the company for $1 million. Shin--a scam artist of the first order--didn't want to pay so he killed Smith instead. He even sent the dead man's

HI, I'M Christopher Carlson and I'm the worst grandfather in America. Nimrod Chris, 45, took his three young grandsons for a hike in the Grand Canyon, sounds good, right. But wait: the hike was 18 miles in 108 degree heat and Gramps denied the boys--12, 9, and 8--food and water. He hit them, pushed, pinched, choked them on the hike. He has now been jailed on six counts of child abuse.
Read more »
Posted by Crime Scene USA at 7:49 AM No comments: 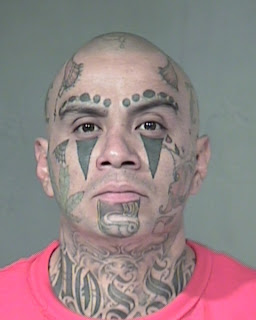 WHAT DID his mom say when she showed up at Thanksgiving? If she's like our mom, she started crying and then was mostly silent the rest of the visit. It's Cute Tattoo Week!
Posted by Crime Scene USA at 7:28 AM No comments:

A CROOKED politician? Surely not?
A Rhode Island lawmaker has been accused of stealing the proceeds from a life insurance policy on his friend's dead daughter.
State Rep Leo Medina, who has a history of legal woes, allegedly offered to help his pal cash in on his share of a $31,000 share of a policy on his on his 32-year-old daughter, who died of heart failure in May 2007.
But cops say that he directed $3000 to an attorney and pocketed the remaining $28,000, of which it's believed, he spent $24,000
Of course he denies taking the money, telling The Providence Democrat the charge was "extortion" and claiming relates to a simple and non-criminal disagreement over money and "will be gone" in 30 days.

A DOUCHEBAG hacker who infiltrated computers belonging to women and teenage girls and blackmailed them with their explicit photos has been jailed for six years.
Pervert paraplegic, Luis Mijangos, 32, sent malicious software disguised as popular songs or videos to his victims' computers that also were unwittingly sent by women and teenage girls to their friends and family.
It allowed him to read their e-mails and watch them through webcams without their knowledge and access nude photos they had taken of themselves.
He then threatened to post those images online unless they sent him more racy photos or videos of themselves to him, or if they went to the police.

IT'S taken them over a year but finally the Peruvian prosecutor's have formally charged Joran Van Der Sloot with first degree murder.
The disturbed Dutchman--the only suspect in the disappearance of American teen Natalee Holloway in Aruba in 2005--was arrested in May 2010 in Peru for the vicious slaying of pretty Stephany Flores, whose naked body was found in his Lima hotel room.
CCTV footage caught her going into his room, but never leaving.
Then he took her money, bank cards and fled to Chile.