CHECK OUT TODAY'S COLD CASE USA FOR ALL THE NEWS!

WE HAVE A GREAT line-up of stories today on Cold Case USA, INCLUDING: Loner Beacher Hackney didn't want to change shifts so he murdered his two co-workers. Now, cops are trying to find him; A cigarette butt reignites the investigation into the 1989 murder of Zahia Salem; A detective is haunted by the bizarre 1998 murder of single mom Debra Sue Murray; and how cops nabbed Robert Temple in the unsolved 1999 murder of his wife. CHECK OUT COLD CASE USA!
Posted by Crime Scene USA at 3:13 PM No comments:

AS THE FBI draw ever closer to finally unraveling the mystery of famed hijacker D.B. Cooper who vanished literally into think air 40 years, an Oklahoma woman says the mystery man was her uncle. Marla Wynn Cooper says her uncle, L.D. Cooper is the man who hijacked a plane in November of 1971- parachuting away with$200,000. She says her uncle has been dead over a decade- and she recently sent investigators a leather guitar strap made by her uncle and a picture of him. See the clip.
Posted by Crime Scene USA at 10:13 AM No comments:

THESE are the exclusive pictures of Casey Anthony taken in Ohio this past weekend. 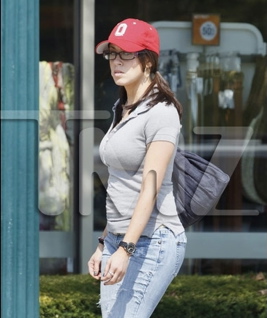 As you can see she's put on a bit of weight after the trial and despite her lawyers assertions, she doesn't seem to be in danger. More After the break.
Read more »
Posted by Crime Scene USA at 8:14 AM No comments:

HOLY bulls**t Batman.
It didn't take the caped crusader to work out that this carjacker was spinning a line, but to be fair it was quite a novel excuse.
Would be thief Micah Calamosca opened the door, sat down and told the man to get out. Except the man he picked was Detective Robert DiGiacomo who was on the look out for an assault suspect in the Shadyside area of Pittsburgh. Needless to say, the unimpressed detective pulled his gun and ordered the 21-year-old out of the car.
At that point Calamosca came up with the most novel excuse the detective, in fact any officer had heard.

SUMMER MUGSHOT MADNESS! IT'S ABOUT RESPECT... 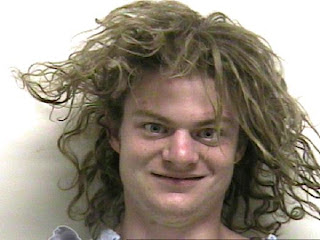 WORDS fail us--again. Maybe we're in the wrong business but if there's one thing that leaves us speechless, it's a brutal head. This Mensa member qualifies.
Posted by Crime Scene USA at 7:18 AM No comments:

A PERVERTED female school counselor who 'picked the most vulnerable' girl in her school to rape has been sentenced to 30-years behind bars.
Dr Allison Hargrave targetted her 14-year-victim after she went to her for help with depression and suicidal feelings at Ascension Episcopal School in Lafayette, GA.
U.S. Attorney Stephanie Finley said that by that fall of 2009 she began sending the victim text messages and emails "graphically discussing engaging in sexual activities with the minor and making plans to meet the minor to engage in the sexual activities."
Then during the fall of 2009, Hargrave "raped the minor female in a medical office in Lafayette,"  continuing to sexually exploit the victim

A PICKUP truck belonging to the troubled stepfather of Celina Cass, has been hauled away by cops investigating her mysterious death.
The tragic 11-year-old's body was found dead on Monday, almost a week after her mysterious disappearance, but detectives are still trying to work out how she died.
As part of their investigation they have taken the truck, which neighbors said was used by her stepfather Wendell Noyes, who was reportedly taken to hospital hours before the youngster's body was found.
In the past he has received treatment for mental illness and was reportedly involuntarily committed to a mental institution and diagnosed with schizophrenia in 2003.
Officers remained tight lipped on why they were taking the truck, but it's thought they maybe searching for DNA or other clues in the vehicle.

COPS have made an astonishing breakthrough in the brutal 1989 rape and murder of 87-year-old Zahia Salem thanks to a cigarette butt.
DNA found on the end of the Newport, has been linked with Charles Brook Jr, who is already serving time for a 1991 rape.
Read more about it here.

POP princess Mylie Cyrus' hacker, who stole a bunch of revealing pictures from the computer of the then 15-year-old singer and then bragged about it online has pleaded guilt.
Moron computer nerd Josh Holly boasted extensively online about his crime and surprise surprsise he promptly got caught.
As FBI agents probed his computer after a 2008 raid they found evidence of other crimes, including 200 credit card numbers that didn't belong to him.
The 21-year-old from Nashville, TN, wasn't actually charged with violating the Hannah Montana star's account, although he may have to answer to that in the future.