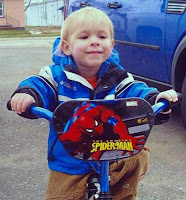 MEET MONSTER. A Michigan man goes on trial today for the vicious murders of his girlfriend and her 3-year-old son last May 15. Cops say Todd Pink shot Carrie Seils to death and then stabbed Skyler Seils. He also injured heer daughter, 5, and a family friend.
"I'm still feeling numb," Chad Seils, 37, of Muskegon told The Detroit News. "Todd has robbed my son's life from all of us. There's a lot he's taken from our family that we'll never get back."
Chad Seils' 3-year-old son was stabbed to death nearly a year ago, but the grieving father says it still feels like yesterday. Jury selection is slated to begin

MOB WIVES HOPES TO BE A REALITY TV 'HIT' FOR VH1 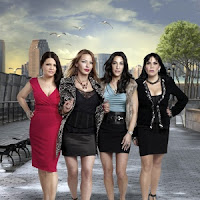 IS THIS the next reality TV 'hit'? Welcome to VH1's new reality series, 'Mob Wives' which debuts April 17. According to the New York Post, the series follows four Staten Island women who are all connected to the Mob in one form or another. And like others in the trashtastic genre of TV, they fight, swear and generally make spectacles of themselves. Apparently it makes Jersey Shore seem like Masterpiece Theatre.
To wit: "A rat is someone who doesn't mind their f--king business and gets involved with the cops," opines Renee Graziano, daughter of Anthony "The Little Guy" Graziano, consigliere of the Bonanno crime family. "If you're a rat, you're not in my circle. Matter of fact, I'll make your life so f--king miserable you won't be able to hang out in

OF all the games they could have played, this one was probably the most idiotic.
Erica Clayburn closed her eyes, with a pistol in her hand while her boyfriend Ryan Martin would walk off to somewhere in the room of his mother's home in Carlise, PA.
Then Martin would say: "gun" and she would open her eyes and dry fire the empty pistol.
If you haven't already guessed what happened, of course, this time

SHE couldn't wait to turn 18, but her party ended in chaos when someone walked in and started shooting.
Robel Laboy,17, was executed with a shot to the head at point blank range and his pal David Johnson, 19, was also shot as the celebrated the birthday of their friend Kalisha Coleman in the Chester, Penn social hall.
"Someone just opened the door and started firing," a party goer told the Daily Local News.
"It was crazy."
Cops, who brought dozens of people in for questioning after locking the building down, are holding one suspect, a 17-year-old male, but are still unsure of the motivation behind the monstrous onslaught.

MURDER and mayhem go hand in hand in Mexico, but even cops are appalled by the rapid rise in mass graves after another 13 bodies were found buried in the north east of the country.
The grisly find which takes this year's body count up to 72 murders, was made by cops looking into passenger kidnappings from a bus last March.
Their investigation into that shocking incident when more than 70


A VICIOUS boyfriend almost decapitated his girlfriend with a frenzied knife attack, that left her dead and her head hanging on by a thread. Sarah Coit, 23, was trying to break up with Raul Barrera when he launched into her, hacking and slashing with the blade during the grisly attack in their NYC apartment.
Her friend Brianna Andalore, 20, a friend who had been living in Coit’s building, could only listen in horror from her front window as Coit screamed in agony.
“She was yelling ‘No, no, stop, stop, don’t hurt me,’"she told FOX News.
"My friend who lives her told me this has been going on for awhile, they’ve been fighting like that for months.
Read more »
Posted by Crime Scene USA at 6:45 AM No comments:

THE evil Craigslist serial killer who dumped eight bodies of murdered escorts on a remote Long Island beach maybe a former cop, investigators say.
Officials probing the case think his "organized and methodical" approach along with other evidence suggest the suspect maybe knowledgeable of detective's techniques.
One investigator familiar with the case and the behavior of serial killers believes told ABC that the monster responsible for these killings probably above average intelligence.
He said it appears the killer usually lures people, kills them in one place and then disposes the body in another, ABC News reports.
This killer is often social, according to the investigator, and would
Read more »
Posted by Crime Scene USA at 6:27 AM No comments:

HIS journey took him straight to jail, after he threatened a bus driver with a knife and tried to take over the vehicle.
Robert Fender bender, 43, jumped on at the terminal in Redding, CA brandished the blade at the 58-year-old Phillip Drake and told him: "he was going to drive."
Luckily Drake was able to step off the bus without any harm and Fender tried to close the door, cops said.
When the driver tried to stop the suspect the would-be hijacker tried to stab him.
Quick thinking Drake then ran to the side of the bus where he was able to activate a kill switch, which disabled engine and brought Fender's hair brained scheme to a quick end.

STRIPPER KILLER GETS 10 FOR DRAGGING DEATH

A STRIPPER who dragged one of her customers for more than a mile under her car in a "ghastly" killing has been sentenced to 10-years behind bars.
Kristina Hensley drove more than a mile with Jae Cho, trapped under the wheels of her SUV after going to his Monroe, OH, home for a private show.
The 35-year-old claimed he touched her inappropriately when she got there, but when she tried to leave he jumped in front of her, but she didn't know he was underneath.