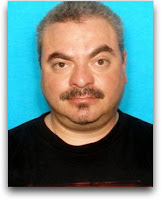 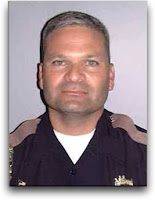 COPS in San Antonio, Texas have nabbed the thug they say murdered one of their own. On Sunday afternoon, Mark Anthony Gonzales, 41, was arrested at his home in connection with the murder of Sgt. Kenneth Vann. On May 28, Vann was murdered in cold blood as he sat at a traffic light. The triggerman came up beside him and blasted away. Vann didn't even have time to draw his weapon.
The 48-year-old veteran's slaying stunned San Antonio as it appeared to be for no good reason 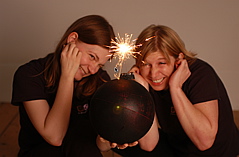 WELL that's one way to get out of school - but definitely not the smartest, that's for sure.
An 11-year-old called in a bomb threat to his school, threatening to blow up students and shoot teachers because he was "bored."
The fifth-grader's message to Indiana's Yorktown Community Schools voicemail system sent the district into lockdown, as officers and sniffer dogs scrambled to search for the explosives.
Marshal Todd St. John tells The Star Press that the boy told officers he called in the threat because he was bored and meant it as a joke.

Read more »
Posted by Crime Scene USA at 7:47 AM No comments:

HE wasn't happy with his medical bill, which said he owed $25 but to be fair to him he did pay it - just with 2500 pennies.
Jason West walked into the Basin Clinic in Vernal, UT, asked staff members whether accepted cash and then dumped the loose change on the counter and demanded they count it according to the town's Assistant Police Chief Keith Campbell.
He added: “The pennies were strewn about the counter and the floor,” and that his actions served; "no legitimate purpose."
So they issued the 38-year-old West a citation for disorderly conduct. That carries a fine of as much as $140. Or 14,000 pennies.

BY the time he was finished, one victim was bound and a second was found shot to death after a fight broke out at a late night party at his home.
But then prime suspect Jose S. Rodriguez vanished after the 2004 killings, which shocked Chicago's, Cicero neighborhood and he hasn't been seen in the seven years since.
Now FBI officer's believe their man, who they consider to be "armed and dangerous" may be comfortable enough to return to the Windy City and they're urging anyone who sees him to turn him.
The 48-year-old is accused of fatally shooting Gabriella Rodriguez, who he did not know and was not related to, despite having the same last name on November 6, 2004 after a fight broke out. 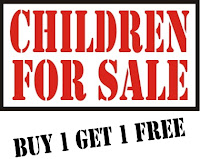 IT turned out to be a harmless prank - a kid placing an advert on sales website offering two children for sale. Stating that the children had to be gone in a week or they'd be put on the streets, the ad included photos and a brief description of the youngsters.
But after spending time investigating, cops who were tipped off by a concerned member of the public, were none too happy when they found out that a 16-year-old from Chatham, Ontario was behind the ad.
He admitted posting as a joke and apologized for the prank after he was warned about his actions.

Email ThisBlogThis!Share to TwitterShare to FacebookShare to Pinterest
Labels: Chatham ON, Children for sale, Kijiji Kijiji

THE trial for the alleged "Baseline Killer" who terrorized Phoenix raping, robbing and leaving nine of them people dead, all but one of them women, is set to start this week.
Wearing hats, wigs and masks Mark Goudeau, 46, is accused of snatching women off the street - some in broad daylight - and raping them.
If they resisted they were shot to death.
One survivor only lived because her assailant's gun misfired. He is already serving a 438-year prison sentence for September 2005 sexual assaults against two sisters - one of whom was six month pregnant at the time.
As they walked home from the park , he jumped them at gunpoint and held his pistol between her legs and made her beg for her baby's life. Goudeau was convicted of those rapes in 2007. 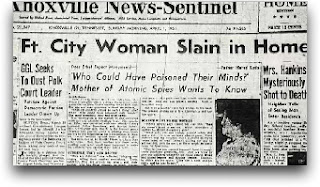 A NEW book by a retired FBI agent hopes to finally name a killer in a notorious unsolved Tennessee homicide. Murder in Harrill Hills by Bob Allen explores the 1951 slaying of Mary Tabler Hankins, 27, shot to death in her home. She was found by her husband Fred, her life hanging by a thread. She later died and for 60 years the files have gathered dust.

A YEAR LATER: WHAT HAPPENED TO KYRON HORMON? 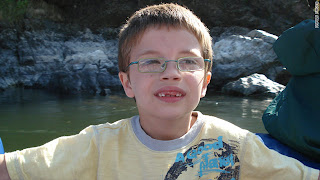 ONE YEAR LATER and no sign of Kyron Hormon. On June 4, 2010 the 7-year-old was dropped off at school by his stepmother--as she told cops--and despite one of the largest manhunts in Oregon history, has not been seen since. The little boy was last seen standing in front of his classroom's doorway just after school science fair. Here's is where the investigation stands:
* Law enforcement has so far focused their attention on his stepmother , Terri Hormon. Last summer detectives asked for the public's help for info on the

NEW feature alert! Too often Monday is dull, dull, dull. No more. Monday's were made for men like Randon 'Mensa' Reid, 26. Apparently, our clever fella thought it a grand idea to shoot at an airplane in Deer Valley, AZ. DUI, felony flight, two outstanding warrants. Atta boy!
Posted by Crime Scene USA at 4:00 AM No comments:

REALLY NOT THE WAY TO ROB A BANK 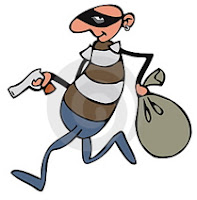 TO be fair, he got the first bit right.
He walked into the bank, handed a note to the teller and demanded money and she promptly handed him $200 in a plastic bag.
What he didn't think about was his getaway - on fact he didn't even plan on getting out of the bank in Peterborough, ON.
Instead nutty John Frederick Booth, 36, simply sat down on the floor and waited for the confused cops to arrive.
Surprised Sergeant Walter DiClemente said: "It's an unusual case. We wish all of our criminals acted this way, it would make our job a lot easier.