SHE made a real boob of herself with this one.
Yukahari Mihamae allegedly refused to go through passenger screening at Phoenix Airport and then argued with staff.
But when a female guard stepped in, she grabbed her boob and squeezed it with both hands, hurting her and causing her to call out for help.
The stunned crew called the cops and Mihamae admitted grabbing the TSA agent and continued to argue with officers before she was arrested. TSA spokesperson Kawika Riley confirmed the altercation to msnbc.com in a statement: "On July 14 at Phoenix Sky Harbor International Airport, local law enforcement arrested a passenger for assaulting a TSA officer during the screening process."
Maricopa County jail officials say Mihamae was released from custody Friday. They couldn't immediately provide any information about her case status.
Phoenix TV station KSAZ says Mihamae lives in Longmont, Colo., and is self-employed.
Posted by Crime Scene USA at 9:53 AM No comments:

Music teacher Patrick 'Big Dog' Trejo must have been humming 'How Much is that Doggy in the Window?' After all, the 25-year-old Phoenix music teacher went to Craigslist to solicit sex with a dog. But he was barking up the wrong tree and pleaded guilty last week to conspiracy to commit bestiality. According to the Phoenix New Times the wannabe maestro of canine copulation and pal Keith Keifer--who also copped to the same bestiality beef--were busted last February in a quest to find dog owners willing to offer up their pets for a rover romp. Of course, as the newspaper noted, all the hound-hankering horndogs had to do was adopt a puppy for a few bucks. "The two were arrested after they allegedly agreed to meet a dog and its owner at a hotel for sex. In reality, they met MCSO deputies who took them into custody.
They both received a year's probation. As for his teaching career, it appears it has hit a sour note.
Posted by Crime Scene USA at 8:50 AM No comments:

WHAT a bust - and the arrest wasn't bad either.
There would definitely been a few raised eyebrows as Brazilian bikini model SueLyn Medeiros was marched into the station house.
Cops told gossip site TMZ that the 25-year-old beauty was pulled over in Hollywood on Wednesday after crashing her DeLorean into a parked car.
Opening the Back to the Future mobile, cops said there was a strong odor of booze in the car and their suspicions were confirmed when her blood alcohol level was .14 almost twice the legal limit in California.   As they gave her the field sobriety test and bragged that 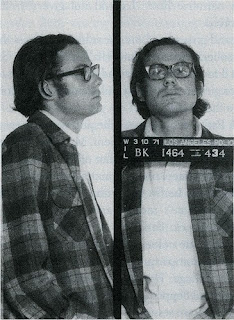 MY LIFE As A Creep, indeed. Just to show we're not picking only on little folks here's the mugshot of famed Black Dahlia author James Ellroy from one of his numerous boozed out escapades with the law. So, keep faith, a bad mugshot doesn't always spell ruin. Just most of the time.
Posted by Crime Scene USA at 8:35 AM No comments: 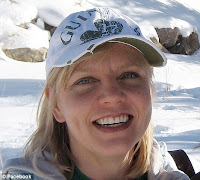 THE SISTER of a Denver woman who mysteriously disappeared has asked cops to try and locate a man she met on Craigslist when looking for a roommate. Amy Ahonen, 38, vanished July 8 and her Jeep was later found on Highway 6, her purse credit cards, cell phone and car keys were discovered in the unlocked vehicle. She has not been seen since. Her sister Andrea, said the man "scared Amy" so much she pulled the ad down. Andrea Ahonen said: "It indicates to me she only meant to be away from that car for five minutes or less. We're from Detroit. We lock our doors."
Amy Ahonen's parents and sibling flew in from Motown to meet with
Read more »
Posted by Crime Scene USA at 8:26 AM No comments: 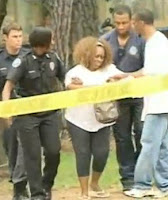 SHE WAS supposed to shoot the pit bull named 'Cocaine'--but instead Betty 'Quick Draw' Walker put two bullets into her husband's chest in a bizarre Jackson, Mississippi. According to cops, 'Cocaine' "lunged and tried to attack some children." That's when Betty pulled out her gun and fired, hitting hubby Robert Walker, 53, in the chest. He was dead in the hospital two hours later. 'Cocaine' was only wounded.
But Robert Ferguson, 19, whose cousin owns the pit bull told the Jackson Clarion-Ledger that the dog isn't aggressive and is kept in a fenced in pen when the owner is out. He heard the gunshots and saw poor

PARTY MOM Casey Anthony walked out of jail today a free woman. The 25-year-old shockingly acquitted of killing her toddler daughter was sprung just after midnight from the Orange County Jail. With most of the world still baying for blood, it seems almost unreal. Particularly when even the Florida jury that gave her the free pass all believed she killed Caylee in 2008.
A mob of demonstrators greeted her as she walked out of jail and perhaps into anonymity forever.
Jail flack Allen Moore said: "This release had an