RENO MEN MAY BE BEHIND 13 CHICAGO SLAYINGS

CHICAGO COPS say they've stumbled across two stone-cold killers who may be responsible for more than a dozen slayings in the Windy City. According to cops, two gunsels were nabbed while another was gunned down fleeing the scene of a double murder.
The slayings were part of bloody fake dope deals that turned into heists.
Cops killed Arturo Ibarra, 37, Saturday night after two people were found killed and a third seriously injured in a North Side apartment. A cop suffered a leg wound.

ACCORDING TO THE CHICAGO SUN TIMES: The suspect, Ibarra and the two men had been under
Read more »
Posted by Crime Scene USA at 9:31 AM No comments: 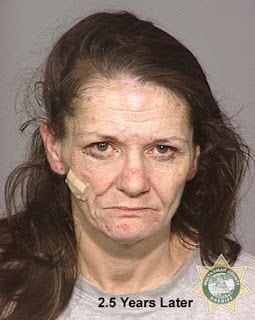 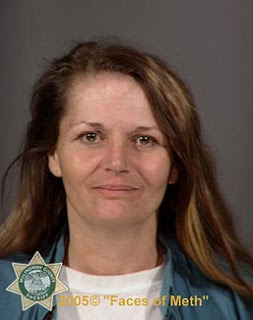 ALRIGHT, we can all say 'Yuck'. In just two and a half years the woman on the left came to look like the woman on the right. Vanity aside, using crystal meth does perplex us. Could it be the ingredients? Battery acid is not something we'd like anywhere near us. This gal and others are part of the "Faces of Meth" campaign illustrating the drug's consequences.
Posted by Crime Scene USA at 9:22 AM No comments:

YOU have to hand it to Christine Stroh. The party girl par excellence is nothing if not resourceful. The 21-year-old was being chased Saturday by the highway cops when she decided to flee her MOVING 1998 Pontiac Sunfire (party girl car of choice.) The two passengers, needless to say, were shocked but the car crashed safely into a snowbank.
According to State Trooper Jeremy Rost our heroine "then fled on foot to a nearby evergreen tree" and "was laying in the thick evergreen trees and refused to come out."
But when she heard more coppers coming she tried to split the scene on foot. Sadly, the party girl "lost her high heels and was running barefoot on the ice. She slipped and was taken into custody." Now the bad part: she was taken into custody with a goodtime topping .177 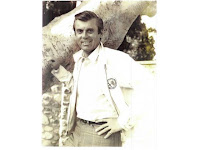 IT WAS supposed to be a celebration. Instead, it ended in murder. Now, nearly 33 years later, cops finally have a suspect in the vicious murder of Brent Stapleton Tobey.
On Nov. 20, 1978, Tobey was supposed to be celebrating the conviction of the man who murdered his friend. Tobey and another pal had discovered the body and at first, cops thought the cases were connected.
Now, tracking a DNA sample that had been submitted in 2002, Laguna Beach, California police have identified a suspect: Walter Dalie, now 52, serving a life sentence in Connecticut for murdering his girlfriend. Cops wouldn't comment about motive but ruled out any link to the murder of Tobey's pal.

EL CONDOR, one of Mexico's top drug kingpins has been killed in a running gun battle with cops, authorities said.
Luis Humberto Peralta Hernandez, 44 was believed to a top figure in the Juarez drug cartel who's deadly rivalry with the Sinaloa cartel has led to thousands of death in the Northern part of the country.
He had been accused of involvement in nearly 100 murders, was carrying false ID, which delayed identification of the body.

BARBIE BANDIT BIMBO BACK BEHIND BARS

BARBIE bandit Ashley Nicole Miller is back behind bars for violating her probation.
Together with Heather Lyn Johnson, she gained national attention when they were seen laughing on surveillance video as they robbed nearly $11,000 from a bank teller, who was later shown to be part of the scheme.

Read more »
Posted by Crime Scene USA at 6:23 AM No comments:

PROSECUTORS have described the case as "one of the most horrific" ever to be seen in Western Missouri - men paying to torture a mentally ill young woman who was being kept as a sex slave.
James Noel, 45, this week admitted he paid money to shock the 25-year-old with an electrical device, even though she complained that it was painful.
The 45-year-old pleaded guilty Monday in U.S. District Court in Kansas City to one count of conspiracy to commit sex trafficking by force, fraud or coercion.

Read more »
Posted by Crime Scene USA at 5:44 AM No comments:

NUDE photo's have surfaced of Teen Mom Amber Portwood, which could land the troubled star in yet more trouble.
Already facing charges of domestic assault against her daughter's Leah's father Gary Shirley, the 17-year-old who hit the headlines by appearing on the MTV show now fears social services could get involved because of the pictures seen here on Radar Online.
They show the young mother, who has a hideous tattoo of her baby on her midriff, in a variety of nude poses.
According to the Daily Mail, said in a statement that the pictures were "stolen" by "someone I trusted."
She said: "It makes me sad that anyone would do this, and I'm horrified that something so private is being shared publicly."
It's just another drama for the pugnacious teen mother, who maintains her