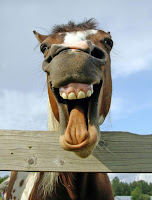 JOHN ROBERT MESTER was not going to take neeeiiigh for an answer in his amorous adventures involving a horse. The Michigan man, 62, was pinched in June having sex with a horse on his neighbor's property. Now, according to the DETROIT FREE PRESS our bestial bad boy is, uh, getting counseling. And he acknowledges that, maybe, he needs some help.
At a sentencing hearing Monday, he told the Judge: "I know I have some psychological issues. I know my actions are (in)excusable."
He got  90 days in jail and five years of probation. He was also ordered to pay more than $4,200 in restitution to his neighbor, Cindy Heistand, who runs a horse boarding business on her property.
Earlier, he was pinched having sexual intercourse with a pony. He got 30 days in jail.
Posted by Crime Scene USA at 8:49 AM No comments:

THEY CALLED him 'The Duke'. Or Dirty Paul. Or self-love LaDuke. You get the picture. A 75-year-old suburban Chicago teacher name Paul A. LaDuke loved his students. So much so that he made a handwritten admission that for the past 10 years he masturbated in class while fantasizing about the nubile lovelies. The Duke was busted for a Veteran’s Day incident witnessed by two students at the Schaumburg Christian School. While his students were working on an assignment, LaDuke placed an apron around his waist, unbuckled his pants below his hips and began masturbating behind a podium.
LaDuke is married and has grandchildren and great-grandchildren, according to his attorney, Irving Seidler. The shyster says: "I believe he has dementia or perhaps early stages of Alzheimer’s."
POOR PAUL PLEASURE'S PLIGHT
Posted by Crime Scene USA at 8:38 AM No comments: 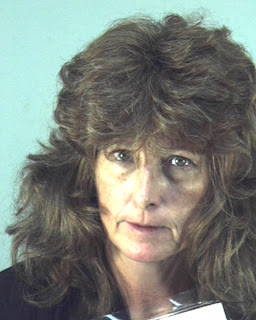 WELL, what do you think? We're pretty sure this person was once in T-Rex or some other glam outfit.
Posted by Crime Scene USA at 8:28 AM No comments: 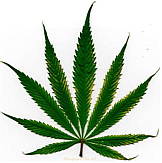 NO ONE likes a grass - especially when it's your own 11-year-old son.
But Heidi and Mark Siebenaler's youngster, Luke, was so annoyed wit the marijuana smoke filling their home that he took pics of the pot and sent them to the police.
Agents then served a search warrant on their home in Hastings MN, home and found two Wal-mart shopping bags in the master bedroom.
Worse still, Heidi is a Dakota county probation supervisor.

EVIL cult killer Charles Manson's self described "right hand man" has been denied parole - again.
Charles "Tex" Watson, 65, who helped to organize the horrific slaughter of actress Sharon Tate will remain in jail for at least five more years after the California Department of Corrections and Rehabilitation, denied him for the 14th time.
Los Angeles County Deputy District Attorney Patrick Sequeira said he was pleased with the news.

CHIM-CHIMINEY chim chim cher-oo; I see a couple of years in jail for you.
Meet Ranaldo Jack, who's clearly competing for the title of 'World's Most Ineffective Thief.'
The 17-year-old was trying to copy Santa by sneaking down the chimney, but instead of giving, he was most definitely planning to take what he could get.
Except he never made it, because he got stuck for more than 10 hours and had to be freed by firefighters, who pulled him out with a rope.
Neighbor Laura Chaparro told the Atlanta Journal Constitution she heard someone yelling for help from her neighbor's chimney.
She said: "We were talking to him, 'What are you doing down there?' He just said, 'Ah, I'm stupid."

PARTY mom Casey Anthony narrowly escaped and assassin's bullet after her "panic stricken" bodyguards pulled her out of her safe house it has been revealed.
Her terrified security detail whisked her to an emergency hideout after a hitman allegedly located her secret hideaway and stuck a death warrant to her door.
The chilling message read: "I know where you are, I'm coming to put a bullet through your brain."
According to National Enquirer it "set off a complete panic" and the security team had to assume that Casey's head would be blown off the moment she stepped outside the house.