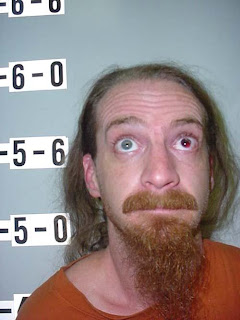 One of the world's great mysteries has finally been unraveled: Famed Brit comedian really DIDN'T die of a heart attack while filming Yellowbeard in Mexico in 1982. He's been in Texas all along.
Posted by Crime Scene USA at 7:24 AM No comments:

Few play the game jewels in the crown better than America's biggest deadbeat dad, Orlando "You Turn Me on Baby" Shaw. The walking, talking sperm bank has a staggering 22 children by 14 different women and has now been dragged into a Tennessee court for unpaid child support. What? You have to pay, care and nurture them? Damn straight my ejaculating friend. The 33-year-old even said he'd lost count of how many kids he has and by how many mothers. Taking a guess, the condom-hating horndog thought "roughly" 18 kids with 17 women.

GENEROUS donors have given more than $800,000 to the victims of the Cleveland horror house, who were allegedly subjected to a decade of sexual terror by Ariel Castro.

Horrified at the abuse Amanda Berry, Gina De Jesus and Michelle Knight are said to have suffered, people from all over the World have sent in cash to help them readjust to day to day life.
Cops say, Castro, snatched the women, all of whom were in their late teens and early 20s from the streets near his rundown home.
Chaining them in his basement, he allegedly used them as his personal sex slaves, beating them if they refused to comply to his wicked demands.
His first victim, Michelle Knight,  told officers that he not only beat and starved her, but also forced her into five miscarriages.
Read more »
Posted by Crime Scene USA at 7:02 AM No comments:

A spurned young woman, her obese dad and her chess-playing boyfriend lured a love rival to the family trailer home and then tried to cut off her fingers with pruning shears.

Cops say Shena Moore, 24, invited the victim --and artist-- to the home in Mason, Ohio after learning her boyfriend, John "Game, Set, Match" Gulley, 31, had been sexting the woman. The artist, 27, agreed to discuss the pair's falling out on May 5.
When got there, Moore's father, 450-lb. Gerald "Fat Gerry" Moore Jr., 49, hit the victim with his cane while Shena began punching her. The twisted trio then pinned the terrified woman to the ground and


Two Florida moms showed their kids the true meaning of sportsmanship and competition -- they hit smashed, hit and choked each other at a talent show. And it was the maniacal moms who stole the show. A video [above] shows the gruesome twosome slugging it out. The good news was that the hundreds of kids present at Lakeview Elementary School thought it was funny.

A TWISTED mom who allowed her mentally ill daughter to be prostituted, raped and impregnated had the nerve to ask about regaining custody.
"That would be the worst thing that could happen," a judge told Cheryl Tchida after listening to what  her teenage daughter with the mental capacity of a five-year-old, who also suffers from dwarfism had been through .
It emerged that Tchida thought it would be fine to leave 19-year-old, who has an IQ of just 45, at a St Paul, Minn, motel with a 17-year-old "friend" who she'd met days earlier at a fast food restaurant.
It was the start of a nightmare for the unsupervised youngster who can't even tell time, read or care for herself.
Along with her "friend" were five other men, including the boys uncle,