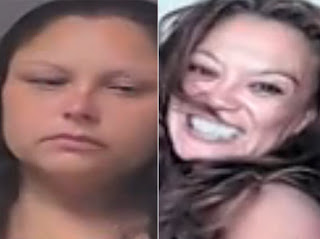 A TWISTED California woman soaked her roommate in gas and then incinerated her with a lit cigarette--then watched the woman burn. Evil Chasety Reynolds, 32,  pictured left, was jailed for her sick attack on Victoria de la Fuente, 46, who was burned over half her body. Lemoore Police Commander Steve Rossi said: "I have never seen a case as disturbing as this."
A witness called 911 and when cops arrived found Reynolds cleaning her driveway while de la Fuente 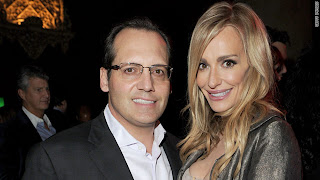 THE FAMILY of tragic Real Housewives of Beverly Hills character (yes, we know it's not really real but just the latest indicator we're going to hell in a handbasket) Russell Armstrong who died last month are hinting he may have been murdered. Arrmstrong was found hanging from a rope and had despaired how he would be protrayed in the latest installment of the idiotic series.
And yet...a toxicology report showed no booze, prescription drugs or illegal substances in his body when he died. Armstrong's wife Taylor claims it was 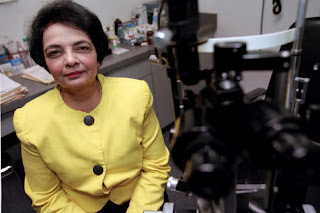 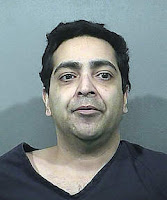 COPS IN Indiana believe that a missing doctor is dead and have named her oldest son as a person of interest in the six-month mystery. Ophthalmologist Promila Mehta Paul, M.D. disappeared March 21 and her son Paresh Paul--who lived with her--disappeared at the same time. He was found five days later crossing the border with Mexico back into the USA and detained at San Ysidro, California. He refused to speak with cops and has not yet been arrested or charged. 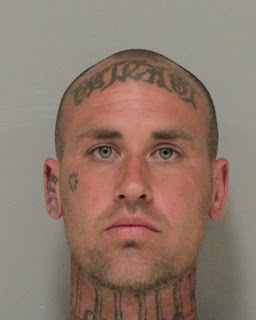 WELL, this guy missed the boat on Summer Mugshot Madness Cute Tattoo Week but at Crime Scene USA we never, ever, say never. The problem for dude is that we could seen the bones (prison?) on his neck but can't make out what it says on his forehead. The last four letters appear to be E.A.S.T. so at first we thought Beast but that's not quite it. Any ideas?
Posted by Crime Scene USA at 8:05 AM 1 comment:

SINCE 9/11 every aspect of our lives has changed. Planes, trains, where we go and how we shop. And as it has become more difficult for terror cult Al Qaeda and its twisted sympathizers to hit hard targets, they are turning their eyes to the soft--such as malls. According to Stores.org: Malls and many retailers have dramatically altered their security operations over the last 10 years. The addition of personnel and technology, combined with strong collaboration with federal, state and local law enforcement, has placed a greater emphasis on prevention. And whether it’s the threat of a bomber or a gunman, strong training across all levels goes a long way toward maintaining high levels of safety at stores and malls.
Security expert Russ Lauria, president of ITC Security Consultants has more than 28 years of experience

A TWISTED killer plucked a teenage girl from the street as she was walking home, brutally stabbed her to death and then burned her body in a vacant lot in North Las Vegas.
Alyssa Otremba, 15, had texted her family to say she would be home within half-an-hour, just arfter 6:30 on Friday evening.
But she never made it.
The next day family and friends found Alyssa's scorched body in a vacant lot on the edge of town, on the route she would have taken home.
She had been stabbed around 40 times before being set on fire, according to the Clark County Coroner's Office.
The following Monday cops got a tip from Elizabeth Morales, 18, who claimed her boyfriend, 19-year-old Daniel Ortiz may know something about the brutal murder.

﻿IT could have been a storyline from one of her 'Law & Order, Criminal Intent' shows, but thankfully all ended well for Kathryn Erbe.
The star who played Det Alexandra Eames on the show was stalked by creepy Charles Nagel, after she refused to hug him, while she was filming in Manhattan.
So the pudgy weirdo waged an online campaign of terror against her posting a photo of Erbe's young daughter on with a cockroach drawn on her face and the words "I'm ugly" scrawled in a bubble next to her mouth.
Read more »
Posted by Crime Scene USA at 5:47 AM No comments:

FINALLY!
It's only taken two years, but at long last the thriller trial of the man accused of killing Michael Jackson has begun.
Dr Conrad Murray, who worked as the superstar's personal physician allegedly administered a fatal dose of the powerful anesthetic propofol, which ultimately killed him.
But although it's only day one, his lawyers are already arguing about the jury, which will not be sequestered during the hotly anticipated trial.
They claimed they are worried media coverage could leak into the jury pool and are asking for the trial to be put on hold.
Already more than 100 of the potential 182 potential jurors have been screened out of the trial, after filling out a 30-page questionnaire to determine their knowledge of the case.