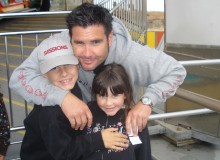 COPS in Los Angeles have arrested the thug they suspect was the main attacker in a vicious assault on a San Francisco Giant fan at Dodger Stadium March 13.
According to Fox News, detectives investigating the horrific assault on Bryan Stow received a tip from a parole officer who fingered Giovanni Ramirez, 31, as thug-in-chief. The L.A. man was booked for assault with a deadly weapon and is being held on $1 million bail, cops said.

Police Chief Charlie Beck said of being told that Ramirez was in custody: "He said the words I've been waiting for, for seven weeks.
Read more »
Posted by Crime Scene USA at 9:15 AM No comments:

A MISSING model who sparked a huge police search has been found drowned in the Chicago River, cops say. Gorgeous Irma Sabanovic, 25, who modelled under the name Ira Blackbird was found in her Ford Focus and although authorities have ruled out foul play in her death, they have yet to say whether it was suicide or an accidentCops have been searching for the troubled beauty for almost two weeks after she disappeared on her way to a night club on Goose Island. The model, who was originally from Bosnia had sent a friend a text message at 2am saying that she was lost. He car was found just two blocks from the club. Mike White, a Chicago-based photographer, first met Miss Sabanovic two years ago when she approached him about expanding her portfolio. He told the

KIDNAP victim Elizabeth Smart is a "survivor" who wasn't "significantly psychologically damaged" by her abduction defense lawyers have astonishingly claimed.
Brian David Mitchell's attorney's made the amazing claim in a four-page court filing, in an effort to persuade a judge to give him a lighter sentence.
At age 14, Elizabeth Smart was snatched from her bedroom at knife point in 2002. She was held captive by Mitchell, a homeless street preacher, and his wife Wanda Barzee for nine months.
Mitchell forced her to "marry" him in a polygamous union.
But despite the horrific nature of the crime his lawyers claim she

'YOU GOT WHAT YOU DESERVED': JUDGE TO KILLER, 14

AN evil child killer who tossed a boy from a five-storey parking ramp when he was just 14-years old has had his sentence upheld by a judge who told him: "You got what you deserve."
Omer Ninham, now 27, was part of a four-strong group that accosted 13-year-old Zong Van as he rode back to his Green Bay, WI home with a bag of tomatoes for his family. After punching him, they chased him to the top floor of a parking ramp where they cornered him.
Along with another boy, babyfaced assassin Ninham grabbed Van by his wrists and ankles and tossed him off.
A bystander on the ground said he heard a sound: "like a wet bag of cement hitting the pavement." Now 27, Ninham had appealed his sentence for first-degree intentional homicie, calling it "cruel and unusual."

Read more »
Posted by Crime Scene USA at 5:39 AM No comments:

HER disappearance left her owners barking mad, but for five-years they had no leads as to where beloved family pet Cookie had gone.
But over half-a decade after the chihuahua disappeared she was returned to her owners, who had long given her up for dead.
Owner Alejandro Pantoja had almost given up Cookie for dead after she vanished from his San Diego, CA home.
"We were surprised," he told the Union Tribune. "We had nearly given up hope on ever finding her."
He added that she seems to remember him, his wife and his three daughters.
Cookie was returned after a woman called animal services to say she found the tiny dog on her doorstep along with a black terrier.
Monica Madrigal told the paper: "I really didn't want to give the dog back because she was so cute, and I really like animals too, but I knew what the owner must have been going through."