HE PROMISED people the sun and the stars. He ran five weight loss clinics in Illinois and made a killing by promising unhappy people that he could solve their problems forever. Now, Gautam Gupta, 57, is on the lam and wanted by the FBI.
Gupta is the focus of an international manhunt, charged with defrauding both state and private insurance companies out of an eye-watering $25 million, according to the FBI. According to the feds, Gupta and his unscrupulous staff submitted claims to Blue Cross / Blue Shield Insurance Company and Illinois Medicaid for unnecessary procedures – or procedures that never occurred. According to the FBI Gupta scammed some $25 million for false claims between 2001 and 2011. A 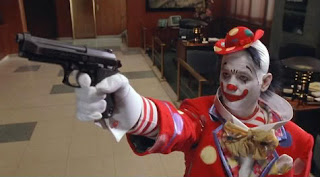 JERRY MOORE wanted to go robbin'. The 16-year-old Chicago native even showed his older brother Mike Jordan his piece: a .38-caliber revolver. The Jerry told his big brother "I'm gonna rob someone."
Mike told the Chicago Sun-Times : "He was all talk, you know? I thought he just wanted to be seen on the street with the gun."
Jerry figured a clown at a community sleepover event would be an "easy target." Big mistake for 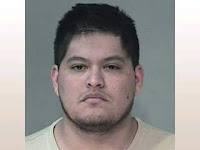 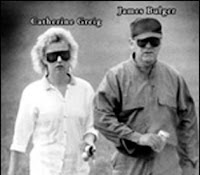 FBI investigators are going to refocus their energies in bringing Boston mob kingpin Whitey Bulger to justice by turning up the heat on his longtime moll: Catherine Greig. G-Men believe that Greig is the key to finding Bulger, who has been on the lam since 1995. The onetime pooh-bah of the notorious Winter Hill Gang--and inspiration for Jack Nicholson's whacked out gang chief in The Departed--is wanted for the murders of 19 men and women along with a litany of other charges. The FBI is offering a $2 million reward for the capture of the 81-year-old killer. The Boston Herald has also suggested that Bulger could be dead and that the Feds may just want to know where, ahem,

Read more »
Posted by Crime Scene USA at 9:13 AM No comments:

RAPPER Tone Loc could probably have used some 'Funky Cold Medina' after turning into a 'Wild Thing' and allegedly attacking the mother of his child on Saturday.
The four time Grammy nominee and voice actor who also starred in films like Ace Ventura Pet Detective got into a physical altercation with the mother of his child reports TMZ.
Burbank police Sgt. Tracy Sanchez says 45-year-old Anthony Smith - Tone Loc's real name was arrested, but he remained tight lipped about the alleged victim or the circumstances, reports the The Sacramento Bee.

IF YOUR going to go on a crazy drunken rampage there's no point doing things by halves.
And boy, did Idaho State Senator John McGee go for it.
The former 'Republican Legislator of the Year' who recently  supported legislation to outlaw texting and driving, got completely wasted, stole an SUV, crashed it and then went to sleep in it.
The Senate's youngest member had one too many at a Boise golf course Saturday night before jumping into the Ford Excursion with the 20ft trailer hooked up, which had been left with the keys in.
Shortly afterwards he tried turning the vehicle and trailer around in a driveway only to jackknife it and become stuck.
At this point the somewhat confused senator got out and went for a little wander before returning to the vehicle and falling asleep.

CASEY ANTHONY: SHOULD SHE TESTIFY?

CASEY Anthony's legal team are locked in furious arguments over whether she should take the stand in her defense.
Lawyers for the one time party mom, who is literally in a fight for her life, can't decided whether her testimony would help or hinder her case.
A legal insider said: "Casey taking the stand could either make or break her case. Her performance would be crucial in swaying the jury.
"She would only have the one chance to convince them she didn't kill Caylee and if she get's it wrong the case would effectively be over. "
They added: "It would literally be a case of life or death."

REMEMBER the weird case we brought you about the divorcing wife who set up a fake Facebook account and found out her husband was plotting to kill her?
Well it just took another even weirder twist.
Angela Voelkert, 29, set up a Facebook account posing as attractive teen Jessica Studebaker and became friends with her 38-year-old husband in the hope that she could trick him into spilling a few titbits to help her in court.

Read more »
Posted by Crime Scene USA at 4:23 AM No comments: 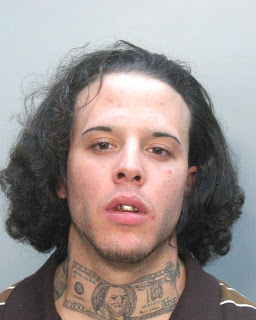 DO WE know his name? No. Crime? Nope again. What we do know is that this dude is sporting one brutal head. He's got the grill (cool) and he's got $100 bill tattooed on his neck. A one-two punch that screams success. Thanks to our friends at THE SMOKING GUN for this stellar example of Americana.
Posted by Crime Scene USA at 4:00 AM No comments:

IDIOT TODD BLAUVELT JR PASSED HOME OFF AS HIS OWN

AS WAYS to impress your girlfriend go, this probably wasn't the best plan.
Idiot teen Todd Blauvelt Jr told his girlfriend that he had inherited a multimillion-dollar lakefront home and convinced her family to move in with him.
Then a problem arose.
Just as they were getting settled in, the owner showed up to the South Bristol, NY home and called the cops.
It appeared that Blauvelt had previously taken other friends to the house and told them the same inheritance story, but said his father refused to give him the house key, New York State Police investigator Mark Eifert said.

Read more »
Posted by Crime Scene USA at 3:52 AM No comments: 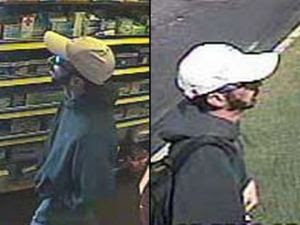 FATHER'S DAY turned into a bloodbath at a Long Island pharmacy Sunday leaving four people dead. Cops say the botched heist happened at Haven Drugs in Medford, New York around 10 a.m. That's when a man entered the family-owned business wearing a baseball cap, sunglasses and brandishing a handgun. The stone-cold killer then executed the four people in the store at the time and fled on foot with prescription pills.
Suffolk County cops say two of the victims, Raymond Ferguson, 45, and Jennifer Mejia, 17, of East Patchogue (who was going to graduate from high school next week) worked at the drug store.