INCONSPICUOUS. That's it. Meet Hells Angel Caius "Headcase" Veiovis (hey, we thought the Angels were going for a more low-key approach these days.) The 31-year-old biker and two other club members were arrested in the slaying of a witness set to testify against a gang kingpin. Also charged were David Chalue, 44, and Adam Lee Hall, 34. Two others were killed in the weekend massacre Sunday in Berkshire, Massachusetts. Cops say the trio murdered canary David Glasser, 44. Now, Caius as if to say to the police, search me, please has a face adorned with horn implants, a 666 tattoo,  a nose ring and lots of other alternative goodies. All three men pleaded not guilty to the murders of Glasser, Eddie Frampton,

A DISABLED pensioner woke up to find a crazed 'vampire' biting chunks off her face, lips an arm in a bizarre attack.
"I'm a vampire and I'm going to eat you," 22-year-old Josephine Smith told 69-year-old Milton Ellis as she sunk her teeth into him.
Despite being in wheelchair the 69-year-old Ellis managed to escape and called for help at a nearby Shell gas station, where he had just met Smith, who immediately called the cops.
Police found a half naked Smith covered in blood but uninjured outside the abandoned Hooters, where the attack took place.
Officers told the St Petersburg Times she had no idea what happened or why her clothes were off. Ellis said she was dressed when he last saw her.
A police insider revealed: "We see a lot of weird, nasty and downright horrible stuff on the job, but for most of the boys, this is by far the weirdest case they've had to deal with. 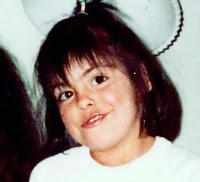 THE MURDER was sickening. Little Aleszandra "Alie" Berrelez was just 5-years-old when she vanished on May 18, 1993 from her apartment complex in Englewood, Colorado. Four days later, her tiny body was found stuffed in a duffel bag that had been tossed down a ravine. Now, 18 years later cops say a DNA hit has finally led to a suspect in the horrendous murder. FOR MORE CHECK OUT OUR SISTER SITE COLD CASE USA
Posted by Crime Scene USA at 8:25 AM No comments: 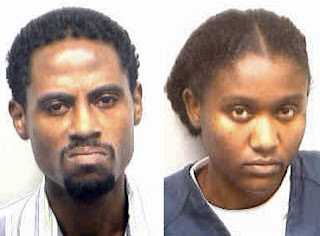 A REALLY stupid vegan couple whose 6-week-old son starved to death because of an absurd diet of soy milk and apple juice must serve their life sentences fro murder. The Georgia Supreme Court was unanimous in rejecting appeals by Jade Sanders and Lamont Thomas. The Atlanta couple rushed their son, Crown Shakur, to hospital in 2004 after he began to have trouble breathing. Docs would not revive the child because of his sever malnourishment. Cops found a "rancid-smelling" baby bottle caked with debris. At their 2007 trial, prosecutors said the soy milk cartons in their apartment stated they were not to be used as a 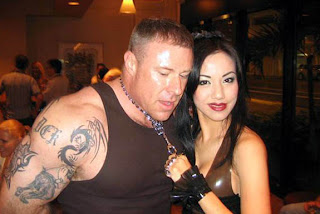 SPANKS for nothing! That might be the complaint of a second man connected to the same dominatrix who is now quite dead. Leather-lovin' Edythe Maa--who goes by the name Jade Vixen-- has been down this road before. Three years ago a lawyer beau was shot and killed by a crazed client and now, a second man is dead. Maa, 29, a one-time Ph.D student who is now an S & M model and all round enthusiast of kink discovered her latest beau dead Aug. 18 in the attic of their Drexel Hill, Pennsylvania home. Peter Stelzenmuller, 49, an
Read more »
Posted by Crime Scene USA at 7:42 AM No comments:

HOUSE OF GOD WAS HOUSE OF ILL REPUTE: COPS

ON the outside, the Phoenix Goddess Temple church looked like a good God fearing place of worship.
But cops say on the inside, the house of God was actually a house of ill repute and the workers were performing sex acts for money.
Phoenix Police Sgt Steve Marcos told KPHO that a six-month undercover investigation revealed that the prostitutes were called "goddesses" while sexual intercourse was known as a "sacred union while john's were called seekers.

MAD Manny Ramirez has been busted for slapping his wife, after a domestic dispute got out of hand in his South Florida bedroom.
Cops say the 12-time All Star, who recently retired from the Tampa Bay Rays after he tested positive for a performance enhancing substance, pushed his wife and caused her to hit her head on the bed's headboard.
She told the deputy she was afraid the situation would escalate, but Ramirez denied striking her, telling a deputy she hit her head after he shrugged her.
It's just another in an unfortunate series of incidents for the former Red Sox MVP, who helped them end their 86-year World Series curse in 2004 and then again in 2007. 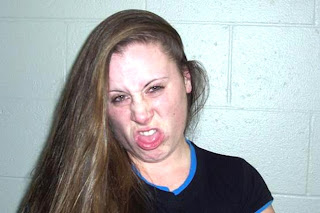 APPARENTLY, her name is Tara Tobin but we're not really sure. Nonetheless, she's all about the attitude. And we like that. In fact, we're pretty certain if we could hear her she'd be saying: "You'll never take me alive copper!"
Posted by Crime Scene USA at 6:29 AM No comments:

AN EVIL stepmother who allegedly hacked her little girl into pieces has had her trial postponed after attorneys spoke with the judge.

Elisa Baker, 42, is accused of dismembering her 10-year-old stepdaughter, Zahra, slicing her up into little pieces last October.
As we reported here, her distraught father Adam sparked a huge manhunt for the little girl, who lost her left leg and hearing in both ears while being treated for cancer, aged five, after she went missing from her home in Hickory, NC.