A FORMER high school friend of missing California nursing student has been arrested on suspicion of killing her. Cops say Giselle Diwag Esteban hated missing Michelle Le, 26, because she was friend's with her baby's father. Michelle was last seen three months ago leaving a Bay Area hospital. She was never seen again and her body has not been found. MORE ON THE MICHELLE LE CASE

Posted by Crime Scene USA at 8:33 PM No comments:

THE WHACKED out junkie accused of cold heartedly executing four people on Father's Day will plead guilty tomorrow according to reports.
David Laffer is accused of lining up his victims in a Long Island pharmacy and planting bullet ino the brains of workers Raymond Ferguson, 45, and Jennifer Mejia, 17,  and customers Bryon Sheffield, 71, and Jamie Taccetta.
It's thought he wanted the Hydrocodone tablets because he and his wife Melinda Brady were addicted to the super strong painkillers.
Now source has allegedly told the NY Post that he "will plead guilty tomorrow'' before a Long Island judge.
The source declined to provide details of the expected guilty plea, but Laffer, 33, is expected to plead guilty to the first-degree murder and robbery charges against him.

Read more »
Posted by Crime Scene USA at 9:57 AM No comments:

A RENOWNED forensic pathologist is disputing the autopsy report which ruled that the girlfriend of a multimillionaire medical mogul, Rebecca Zahau killed herself. The gorgeous 32-year-old was found nakedly hanging with her hand and legs bound in the historic 27-bedroom Spreckles mansion which is owned by her boyfriend Jonah Shacknai. As we reported here, a weird message daubed in black paint on the door of the bedroom read: "She saved him can you save her?" Her death also came just one day after her boyfriend Jonah Shacknai's six-year-old son, Max, fell down the grand staircase of the Coronado, CA home, when Zahau was supposed to be looking after him. He later died in hospital, a death, which police ruled accidental.
Although Zahau, who was also known as Rebecca Nalepa's death

FROM THE LOOKS LIKE A DUCK FILE: Things have turned stormy for an Arkansas TV weatherman found sleeping in an empty hot tub--with a naked dead man who had a dog collar around his neck. Cops say they found the body of Dexter Williams, 24, in the hot tub, sleeping next to him was Brett Cummins, 33, of Little Rock's KARK. The homeowner told cops that Williams' face was discolored and he had a chain around his neck. Investigators have not ruled out foul play. Cummins (har, har) has been questioned but cops are not releasing his statement and he has not been arrested. KARK szaid the Golden Boy will not be spinning meteorological musings because he is in "mourning."
Read more »
Posted by Crime Scene USA at 8:13 AM No comments:

A MEXICAN man has been accused of imprisoning two teen sex slaves, fathering five children with them and then killing one of them and their baby. In a case chillingly similar that of Austrian madman Josef Fritzl, Jorge Iniestra is accused of abusing the teens, who were the daughters of his girlfriend for seven years and refused to let them outside. The part-time taxi driver allegedly pulled them out of school and locked them in a single filthy room, where he repeatedly abused them, fathering five children aged two, four and five and a three-month-old baby - all of whom are now in protective custody.
Prosecutors say he became fixated with the two girls after starting a relationship with their mother, Clara Tapia, in 2004.
Mexico City's attorney general Miguel Mancera said: "The conditions

A CRAZED gunman walked into a Carson City IHOP and started shooting, killing at least five people before turning the gun on himself.
By the time he was finished four people would be dead, including three National Guardsmen and Eduardo Sencion had killed himself, ruling out any possibility of an explanation for his appalling massacre.
Arriving at around 9am, the 32-year-old pulled up in his blue minivan with a 'Support Our Troops' sticker on it.
Then he pulled out an AK47 assault rifle and without blinking he started to fire, blasting a woman on a motorbike, before charging into the restaurant. There he shot each of the five Nevada National Guard troops sitting together   - three of whom didn't make it.
Another woman was also shot and killed, before the man family

MEET TREVAUN 'DIRTY' BROOKS. Today, he's one of the worst people in America and really does deserve to be castrated--if guilty. Seems twisted Trevaun, 28, likes little girls so much he managed to get his girlfriend's 11-year-old pregnant. Dirty lives in Mt. Clemens, Michigan and is being held on $1 million bond. The girl, now 12, and the baby are in the custody of Child Protective Services (uh, where were you when you were needed?) Apparently Brooks dated the girl's mom when the sex assaults occurred and cops are trying to find out if mom had a hand or knew. The victim was 11 and attended Prevail Academy, where Dirty Brooks worked as a janitor. She had the baby a few weeks ago. 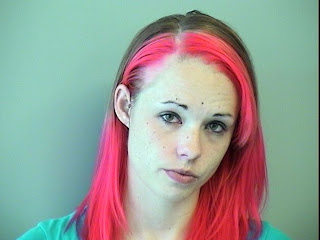 WOW! What's the deal with the hair? It seems lately that in a lot of mugshots featuring women, there always seems to be something with their hair. Shocking dye jobs welcome.
Posted by Crime Scene USA at 6:33 AM No comments: