INVESTIGATORS looking into the suspicious disappearance of Jacque Sue Waller suspect her remains may have been dumped at one of her estranged husband Clay's construction sites. And they believe the remains may have been buried in cement.
Jackson Police Chief James Humphrey's told the Southeast Missourian:"We've considered a lot of different possibilities, and that's just one of them. We don't have anything substantial to say for sure, but yeah, we've considered that."
Clay Waller is in custody at the Cape Girardeau County Jail on other matters. He is the cops' only person

IF SHE told a single soul, she would be murdered. The sinister threat was directed at a 10-year-old Knoxville girl who had been raped and made pregnant by evil James Wallace Davenport Jr. It took her seven months to gather her courage and to tell what the monster had done.
DA Charme Knight said in court: "(James Wallace Davenport Jr.) told her if she did tell (about the rape) he would kill her."
Davenport confessed everything Monday--and admitted he would have killed her, the fetus and her family. The sicko even solicited a hitman--of course, as usual, in reality an undercover cop--to kill them all. He pleaded guilty to rape of a child and solicitation to commit first-degree murder. He'll be doing 37 in the Big House and then he will at some point fry in hell.

COPS have made an astonishing breakthrough in the brutal 1984 murder of schoolgirl Tina Faelz.
Almost 27-years ago the 14-year-old's body was found viciously stabbed by a culvert which she had used for  shortcut home from the Foothills High School in Santa Cruz, CA.
But despite a huge police investigation, no one was ever caught for the brutal crime, until now, when DNA has apparently revealed her killer.
Read more here.

THE leader of the deadly Dougherty gang, who shot up a cop car in a high speed pursuit and the robbed a bank "lived in a fantasy world" according to his lawyer.
Along with his brother Dylan Dougherty Stanley and sister Lee Grace Dougherty, Ryan Dougherty  has been on a crime spree since last Tuesday, when they were last seen holding up the bank in Valdosta, GA.
Despite being the youngest at 21, cops consider Ryan to be the leader of the terrible trio, who are now believed to be hiding out in Tennessee.


UPDATE: The leader of a twisted sex cult that preyed upon children has been sentenced to life in prison. Weird Warren Jeffs was convicted of sexually assaulting two of his child brides. The sicko's conviction  came after a twisted trial in which he outlined his beliefs. MORE IN THE WASHINGTON POST
EARLIER: PEDOPHILE Polygamist leader Warren Jeffs, told girls that God would 'reject them' unless they had sex with him.  Prosecutor's produced an audio tapes of the twisted leader of the
Read more »
Posted by Crime Scene USA at 6:58 AM No comments:

TALK about too little, too late.
In a last desperate bid to avoid the death penalty, convicted serial killer, creepy Anthony Sowell told the court: "I'm sorry."
The 51-year-old was found guilty of luring 11 women to his Cleveland, OH apartment often with the promise of booze or crack cocaine.
But after smoking the drug he turned, repeatedly raping them and beating them to death.
When he ran out of the room to bury the body's in his back garden, he kept them lying around his apartment, causing an almighty stink in the neighborhood.
After refusing to testify during the case itself, Sowell has finally decided to speak in a bid to save himself from the death penalty.

THE MYSTERY remains as to who the notorious skyjacker known as D.B or Dan Cooper really is, after FBI agents revealed that DNA taken from the latest suspect did not match.
Investigators had hoped that they had finally found the man who back in 1971, held Northwest Orient Airlines 727 hostage with what looked like a bomb and then escaped by parachuting out of the plane.
But as we report here, the cold case remains frozen solid.

Posted by Crime Scene USA at 5:37 AM No comments: 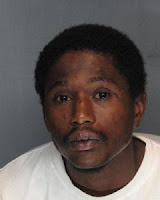 DEAR AMERICA: you now have a new leader in the Biggest Dick sweepstakes. His name is Daniel 'Danny the Dickhead' Baxter, 30, of Stockton, California and he is truly a dick. Baxter and his girlfriend Charlotte Greene got into an argument Sunday and Danny the Dickhead lost it. He picked up Greene's 2-month-old pitbull puppy Feisty and heaved the terrified animal against the wall. Its injuries were so bad it had to be put down. Why, you ask, did Baxter do this? he came home hammered and Greene wouldn't have sex with him. Really.
Greene said: "He woke her too hard, punched her and threw her against the wall. I told him to stop and then ran to the bathroom and started crying. I just want him to get help, like anger management or program for him to stop 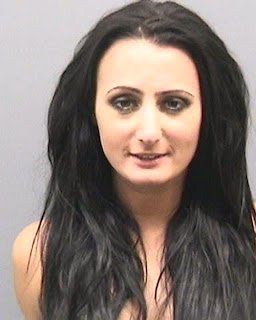 IT'S DAY 2 of our Summer Mugshot Madness Pretty Perp edition. This babe-a-licious bad girl looks like she'd be a barrel of laughs with a bottle of tequila and a moon lit night. Crime Scene USA's guilty secret? We love Party Girls gone off the rails.

Posted by Crime Scene USA at 12:25 AM No comments:

FRIENDS AND FAMILY said goodbye to Celina Cass today and cried a river of tears. The 11-year-old from Stewartstown, New Hampshire was found murdered last Monday wrapped in a blanket and dumped in the Connecticut River about a mile from her home. So far, there have been no arrests as local cops and the FBI try to find her killer--even though the case has yet to be officially classified as a homicide. They are still waiting for results from toxicology tests. Celina was buried in Lancaster, NH