A BUTCHER who murdered then dismembered his wife in a macabre frenzy of bloodlust has been sentenced to 20 years in prison. After Edwin Fuentes, 44, choked his wife Reina De Los Santos to death he then used his cutting skill to dismember her body, stuffing the remains into bags and suitcases and then ditching them in a Queens, New York park. He pleaded guilty but his wife's family weren't satisfied.

Her sister Marisol De Los Santos said:  “I’m hoping that, maybe, they cut you up like you did my sister.
“Your mother must be turning over knowing she carried a demon like you in her womb. If it was up to me, you would go to hell.” BUTCHER JAILED
Posted by Crime Scene USA at 8:26 AM 1 comment:

MUGSHOT MANIA: WE JUST THOUGHT HE WAS A LOSER 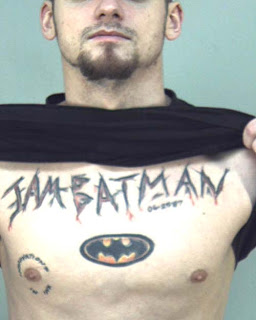 THERE'S A new master at stately Wayne Manor. All along, we just thought this guy was a loser but in reality he's the caped crusader. Sleep easy Gotham City!
Posted by Crime Scene USA at 8:17 AM No comments: 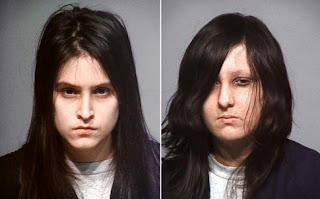 TWO MILWAUKEE women tortured an 18-year-old Phoenix man with knives during a wild two day satanic sex marathon that spiraled wildly out of control. The victim was slashed more than 300 times after being tied up with rope and duct tape. He met the woman online.
Rebecca Chandler, 22, pictured left, told cops when they arrived: "I think you're looking for me." She said things started out as the usual satanic fun and games but "got out of hand." She fingered roomie Raven Larabee, 20, for being the ringleader. Inside
Read more »
Posted by Crime Scene USA at 8:09 AM No comments: 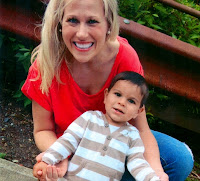 THE CASE of a missing Washington toddler seems to get stinkier by the minute. Sky Metalwala, 2, vanished Sunday after his mother, Julia Biryukova, left him in an unlocked car while she and her daughter walked a mile to get gas. When they came back, so Biryukova says, the little boy was gone. The problem? Cops have now discovered the SUV wasn't out of gas and there was no gas can in sight. Oh, and Julia is refusing a lie detector test. Oh, and she was in the midst of a bitter custody dispute. Cops are being charitable, maybe some other problem with the car. Us? Less so. The story from Biryukova has more holes in it than a slice of Swiss cheese.  MORE ON SKY METALWALA
Posted by Crime Scene USA at 7:58 AM No comments:

MEET DR. MARY HAMER. Radiologist and groupie of accused Natalee Holloway killer Joran Van Der Sloot. The creepy Dutchman is also accused of murdered a Peruvian woman, Stephany Flores. But never mind that, Hamer--who once owned a practice in Montgomery, Alabama--says he's a "beautiful person."  She told Dutch TV: "Joran told me:  'Mary, I will never lie to you'."  And she has even written a song for van der Sloot entitled, "I Will Rescue You". MORE IN THE NATIONAL ENQUIRER
Posted by Crime Scene USA at 7:26 AM No comments:

THE HORRIFIED mom of one of the boys allegedly abused by pervert football coach "Dirty" Jerry Sandusky said she was proud of her son for speaking out against one of the giants of football.
The woman who did not wish to be named said she had challenged the respected Penn State defensive coordinator as far back as 1998, but nothing had happened.  She told The Patriot News: "He admitted to taking the shower, he admitted to some extent something bad happened. The shocking revelations come as the Nittany Lions' legendary coach, Joe Paterno was fired over the scandal. STORY HERE.

THE IDIOT dad of former actress Lindsay Lohan has been banned from ever contacting his ex-girlfriend again.
Michael Lohan, allegedly smashed his girlfriend and so called journalist, Kate Major during a violent argument late last month.
She claimed to cops that he pushed and shoved her because she refused to perform oral sex on him.
But after being told by a judge not to even "dream" about her, he called her.
She immediately called the cops, who were in Major's apartment when he called back later and she put him on speakerphone.
Read more »
Posted by Crime Scene USA at 6:37 AM No comments:

A CRAFTY student who had her bike stolen turned the tables on the thief after she spotted it posted for sale on Craigslist.
Kathryn Lucas posed as an interested buyer and then told the thief that she wanted to go on a "test ride" and then rode off home on her bike, before tipping off the cops.
The 25-year-old University of Colorado student  had left her black Trek 1.2 road bike outside a bar on October 4.
She told KMGH: "I came back out to get my bike to go home and my bike wasn't there."