THE man who brutally stabbed University of Connecticut football star Jasper Howard in an on campus brawl was sentenced to 18 years in prison.

John Lomax III,  thrust the blade into the 20-year-old defensive back during a fight between a group of football players and another group of guys because of a comment a player made about a woman.
The 22-year-old had been charged with murder, but pleaded no contest to first-degree manslaughter in January.
Howard, a Miami native whose nickname was Jazz, died at a hospital from a single wound to his abdomen, just hours after helping the Huskies to a homecoming game win over Louisville.
UConn football player Michael Smith told police that Howard ran across the street yelling "They got me," before collapsing.
Read more »
Posted by Crime Scene USA at 8:59 AM No comments:

A BRUTAL brawl over an affair ended with one woman biting the fingertip off the other in the carpark of a Florida Walmart store.
Clodia Coicour snuck up on her unnamed victim when she finished her shift at the Naples shop and went out to her car.
She said that she threw something into her face that burned her eyes and the pair started fighting.
At some stage she bit the tip of the woman's finger off.
Coicour, who also works at the store told deputies that she heard a rumor that the other woman was having an affair with her husband - which both of them deny.
She was charged with aggravated battery after the Monday night incident outside the Wal-mart in Naples where both women work.


Posted by Crime Scene USA at 8:33 AM No comments:

ACCUSED VICIOUS cop killer Jamie Hood, who killed one Athens, Ga. police officer and wounded another surrendered yesterday on live TV.
Holding five hostages, the 33-year-old insisted the cameras be present as he gave himself up.
The bare-chested thug can be seen here, next to the door. 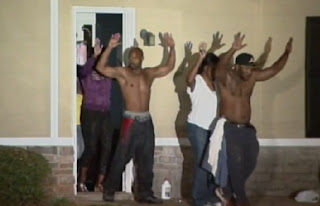 He was surrounded by five of the nine adults and children he had held captive for hours as he negotiated his surrender with state and local authorities.

SHE plied his milkshake with drugs and then smashed his head with a metal ornament until he died a Hong Kong jury judged yesterday.
Nancy Kissel struck her husband at least five times while he lay face down in the bedroom after using six drugs to subdue him, hidden in the sweet, sugary drink.
Then she covered his body with a plastic bag and towels, wrapped it in a carpet and had it moved into storage.
Kissel testified in this her second trial, that her husband, who's estate was worth $18 million in life insurance, stocks and properties, changed after she had the first of their three children in 1994.
She said:  "The more involved he got with the investment banking, the more forceful he was with me sexually."
Her lawyers argued she was a battered, clinically-depressed wife who acted