THE CHICAGO SUN TIMES REPORTS: "Investigators eager to solve the killing then went a step further, obtaining a judge’s permission to have Yang’s best friend secretly record conversations with her about the 2007 slaying of Rhoni Reuter, a police officer testified Thursday."

Yang's long delayed murder trial is likely to center around secret recordings made by pal Christi Paschen. In them, Yang, 43, admits she gunned down

THE SEARCH FOR missing Michigan mother Amy Henslee has ended in tears. Cops say mom of two Henslee, 30, was found shot to death early Friday. The other body was identified as Tonya Howarth, 36.
The bodies were found in rural Bangor Township--about 60 miles southwest of Grand Rapids. Henslee was last seen Monday.
Detectives have arrested Junior Lee Beebe, 34, in the slaying. It's believed Beebe was Howarth's boyfriend. He is expected to be arraigned later today.
On Thursday, detectives had expressed confidence that tragic Amy was still alive.
MORE IN THE DETROIT NEWS
OUR EARLIER REPORT

DEADLY NERVE AGENT FOUND AT LOCKED DOWN BASE 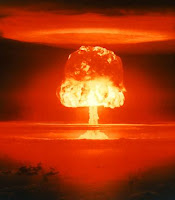 A BIOLOGICAL warfare military base  which was locked down because a small amount of nerve agent was unaccounted for has now reopened after the missing vial was found.
Panicking officials, shut the Utah base, which carries out tests to protect troops against biological attacks was closed down as frantic searches were launched when the VX nerve agent went missing.
Although just a fourth of a teaspoon was missing, even a drop of the agent which affects the body's ability to carry messages through the nerves, could have had terrible consequences for someone.
A mix of about 1200 to 1400 military and civilian personnel at the Dugway Proving Grounds, which sits about 85 miles south of Salt Lake City were held inside the base until it was found.

WE THOUGHT they only liked picnic baskets? Yogi Bear loving, convicted killer Tracy Province, who escaped from an Arizona prison planned to OD on heroin. Then, once stoned in Yellowstone National Park, let the bears eat him. After his capture, he told a sheriff's detective that he had wanted to go up on a mountain, shoot up a gram and: "be bear food."
But as he was preparing the drug, a voice told him not to go through with the plan so he changed course in favor of trying to hitchhike to Indiana to see his family.
He called it: "Divine intervention."

Read more »
Posted by Crime Scene USA at 5:36 AM No comments:

A MOBILE marijuana launcher which catapulted weed across the Mexican border has been smoked out by the National Guard.
Using a remote video surveillance system at they observed several people preparing a catapult and launching packages over the International Border fence last Friday evening.
Here's the footage:

GUN nut Lamar Moore, who wounded four Detroit cops, before being fatally shot, kept a 13-year-old sex slave police say.
Moore had held the girl captive for days, chaining her to the toilet and then using her to fulfill his twisted desires.
Detroit Sgt. Eren Stephens confirmed Moore was being investigated in connection with a sexual attack on a minor, before he met his grisly end last week.
According to WWJ, officers say the 13-year old was a runaway kept as Moore's sex slave.
Two days after the Sunday shooting, Moore's home was destroyed in

Read more »
Posted by Crime Scene USA at 4:53 AM No comments:

A BATTLE of the boffins turned stinky at a California university, when one professor was charged with peeing on a fellow professor's door.
Genius mathematician Tihomir Petrov, a prof at California State University, Northridge, has been charged with two misdemeanor counts of urinating in a public place.
Investigators say a dispute between Petrov and another math professor was the motive.
The Los Angeles Times says Petrov was captured on videotape urinating on the door of another academician's campus office.