Intense, humorless, overbearing, crazy-assed self-described 'Tiger Mom' Amy Chua has triggered a firestorm of controversy. Now, it appears that the Yale professor has raised the hackles of permissive parents everywhere.
On January 8, the Wall Street Journal ran her essay on how she was basically robbing her two daughters of their childhood. To wit: no play dates, sleepovers, choice in extra-curricular activities. Bread and water for afternoon snacks on alternative days.


The newspaper published excerpts of her book in an article titled "Why Chinese Mothers Are Superior." The Internet erupted in a firestorm of outrage over the piece, in which she described how she belitted one daughter -- calling her "garbage," and threatened to withhold food and bathroom breaks from the other if the 7-year-old didn't play the piano perfectly.

The outrage is so intense that Chua has even gotten death threats, according to reports.
Posted by Crime Scene USA at 11:47 AM No comments:

Whore with a heart of gold?
Not exactly. Hammond, Indiana's own Irene E. Janowiak, 38, admitted in court Friday that while engaging in a sexual act she stabbed her client in the chest.

On May 31, 2009, Janowiak was doing a home visit at her new pal's Hammond abode. One thing led to another and soon a whole lot of consensual sex broke out.
But suddenly, our Pretty Woman snapped and drove a knife into the man's chest narrowly missing his heart. The hooker jumped from a second-floor window.
She got a six-year- jolt in the Big House for aggravated battery even though she had been charged with attempted murder. Good Night Irene.
Posted by Crime Scene USA at 11:32 AM No comments: 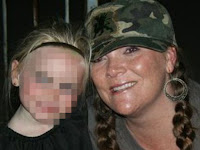 HE’S recently retired in a whirlwind of shame and recrimination following his nude picture scandal – but things just got a whole lot worse for football star Brett Favre.
Now the veteran quarterback’s sister has been arrested in a Crystal Meth bust. Brandi Favre, 34, was busted in Diamondhead, Mississippi and charged with manufacturing methamphetamine and generating hazardous waste.
Hancock County Sheriff's Maj. Matt Karl, director of narcotics, told ABC News here: http://abcnews.go.com/Entertainment/brandi-favres-arrest-adds-brother-brett-favres-troubles/story?id=12607830 that Brandi was "at the location" at the time of the raid. Officers found nine grams of methamphetamine and another 10 grams of the drug cooking in the bathtub.

MTV reality show finalist Baron “Dirty” Colon is back in the dock after being charged with first-degree murder and armed burglary.
Colon made a name for himself on MTV’s: “From G’s to Gents” back in 2009 - a show which gave street thugs hoping for a second, third or even fourth chance to reform.
The show claims to transform "rough-around-the-edges young men" into successful gentlemen.


Back in 2006 the 'Dirty' Colon told viewers: “I got two kids. I want to be in the gentleman's club because I want to change, for them. If I don't change, there's only going to be two things: prison, or death.''

Try as he might, it seems that Colon couldn’t change enough and his prediction of prison is about to come true.

ARIZONA MASSACRE – OUT OF TRAGEDY, HOPE

GUN nut Jared Loughner may have ended her young life at just 9, but in death, Christina Taylor Green is already making a difference.
The youngest victim in the deadly massacre outside the Tucson, Arizona Safeway store which saw six people die, little Christina's organs have now been used to save the life of another child in Boston.
A friend of the family said they’d learned through a donor’s network that a young girl from Boston was now living thanks to organs given up by Christina
There were no details on which Boston hospital or the organs involved as the patient’s identity had to remain anonoymous.

CALI COP ON HIGHWAY TO HELL 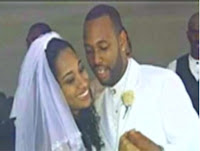 She was supposed to uphold the law, but now Highway Patrol Officer Tomieka Johnson finds now finds herself on the wrong side of it.
The 31-year-old admitted to the killing but told cops she’d gunned down hubby Marcus Lemons after he’d become abusive when they’d argued.
Blasting him in the head near a highway offramp, she then drove to her parents house with his body oozing blood in the passenger seat – instead of going to the hospital.
On arrival he was dead.