EXPENSIVE suits, flashy jewelry, well groomed appearance - nope nothing to suggest a gay man at all.
And despite having vowed to fight the sex allegations between him and four teenage boys, their is apparently no reason to think megachurch preacher, Bishop Eddie Long is gay - especially now he's paid them off instead of fighting their claims.
We have no problem with gay men but it does seem strange to us that he chose not attempt to disprove their allegations that he used to his power to influence them into sexual relationships, but instead settled the lawsuit with money - possibly millions.

THE emaciated baby found dead in a suitcase died of starvation cops said before they charged the 14-month-old's mother with murder.
Tania R. Coleman, 20 of Erie, is pregnant and has two other girls aged two and three stands accused of killing her baby by "nutritional neglect" stuffing her body into the case and then dumping her in her neighbor's trash.
The tot's body was found by the neighbor after heavy rains washed the trash down the street and she found the case.
It was not clear how long the baby had been dead But Erie County Coroner Lyell Cook told The Erie Times News the remains were "in very poor shape."

FORMER actress Linday Lohan has only been under house arrest for two days but the poor little star is already "bored and restless" friends have revealed. The troubled, one time star began her 120 day sentence for violating her probation yesterday, after miraculously avoiding jail time for stealing a a $2500 necklace from an exclusive LA jewelry store.But it seems she's already moaning about how her situation, sunbathing next to her exclusive Venice Beach pad with a tag on her leg.
A source close to the star revealed: "Lindsay is already upset at having to stay at home all day, unable to go anywhere do anything.

Read more »
Posted by Crime Scene USA at 7:42 AM No comments:

BANNED FROM WEB, PEDO CHECKED FB NEXT TO COP

A PERVERT who was banned from using the internet was caught red handed logging onto his Facebook page in an Apple store.
Convicted sex offender Robert Nicholas McGuire, who has a child pornography conviction was spotted by officers in downtown San Luis Obispo, CA.
The quick thinking sheriff's detectives split up and as one followed him, the other checked his probation terms.
According to cops, McGuire went into the store and logged on the internet from a display computer  and began checking his Facebook page.
Bold as brass, the detective went to the computer  right next to him and logged on to the Megan's Law website. 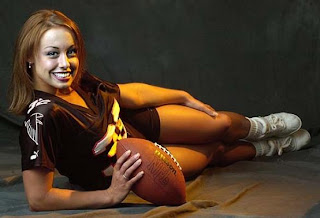 A FORMER Atlanta Falcons cheerleader has been been busted as part of a "massive" and "well organized" chop shop ring which covered the state of Georgia.
Gorgeous Kori Lanard played an active role in the syndicate which stole bulldozers, bobcats and all sorts of other vehicles and then sold them on for a massive profit.
Oconee County Sheriff Scott Berry said: “She was an active participant, helping drive getaway vehicles that were actually chased by law enforcement in