MEET HARRY HARGROVE. Apparently headcase Harry is a legend in his sport. The problem is, his twisted sport is dogfighting and now he's been hammered five years in jail. The 78-year-old hillbilly's deeds were pretty vile.
One dog named Hurricane Hugo was, according to the Charlotte Observer: Restrained by a logging chain hooked to a car axle buried in the ground, the pit bull's only shelter from cold, heat and rain likely was a blue 50-gallon plastic barrel. At 46 lbs., he was described as severely underweight. If his days were spent as those of most fighting dogs, he spent hours each week on a treadmill to build his endurance. At other times, he would have been tethered within several feet of another dog to
Read more »
Posted by Crime Scene USA at 8:38 AM No comments:

THE VIOLENT maniac charged with the kidnapping dismemberment murder of Brooklyn boy Leiby Kletzky told cops when he was busted: "I'm famous!" According to the New York Post, court documents reveal the sickening confession alleged killer Levi Aron told detectives as he went through the crime that shocked the Big Apple.
Levy said he met the lost Brooklyn boy on July 11, then smothered him and hacked him to pieces the next day. His confession reads: "I went for a towel to smother him in the side room. He fought back a little bit, but eventually he stopped breathing. I was still in panic from the fliers [plastered all over Borough Park seeking information on Leiby's 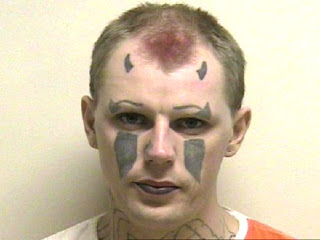 SUMMER is time for America's game: Baseball. And it's very, very clear that this handsomely adorned gent is knocking hell out of the baseball that is life.
Posted by Crime Scene USA at 8:06 AM No comments:

SERIAL killer Ted Bundy was always suspected of committing more murders, but now a vial of his blood could confirm those fears.
Cops are hoping that new DNA techniques will help them complete the profile of the notorious mass murderer, who was found guilty of killing 30 women, many of whom he lured to their deaths by feigning injury.
Read more here.

Posted by Crime Scene USA at 7:27 AM No comments:

A FUGTIVE sex offender has been arrested for questioning in connection with the disappearance of missing Holly Bobo.
Victor George Wall, 43, was convicted of molesting a child in 1988 is now prime suspect in the disappearance of the missing Tennessee nursing student, who was taken from her rural home in Parsons.
She was last seen being led into a woods by her brother Clint, who assumed the man dressed in camouflage was with was her boyfriend, but later called the cops when he found blood outside.
That was April 13.
Investigators have since checked all sex offenders in the area, including nearby Perry County, where Wall moved to four years ago, reports WCM-TV.

CLEVER by name, but certainly not by nature, as these idiot parents tortured their five-year-old son by putting a clothespin on his genitals for dancing inappropriately, cops say.
Dustin Davis Clever, 30, and Cinderella Sunshine Clever, 31, were punishing the boy who had made an 'innapropriate gesture' while dancing with his sister.
For some reason they then thought it would be a good idea to punish him by putting a clothespin on his testicles for forcing him to sit in the corner.
Sheriff Ronnie May told WHNT that after this happened, the father walked in and learned of the situation, laughed, and then walked away.

FREAKY PEDOPHILE polygamist leader Warren Jeffs, who had 24 underage child brides has been found guilty of sexually abusing young girls.
The 55-year-old leader of the Fundamentalist Church of Jesus Christ of Latter Day Saints had 78 wives, 24 of whom were underage and performed a further 67 "spiritual marriages" involving young girls, prosecutors said.
He was found guilty of sexually abusing two girls aged just 12 and 15, by the jury who took just three hours to convict him.
Many of them had been reduced to tears during the trial when they were played a sickening "sex tape" on which Jeffs could be heard panting and breathing heavily.