A PERVERT principal admitted hiding a video camera in the school to get images of young boys using the bathroom.
Pedophile Robert Burke, 43, was caught with all sorts of explicit child pornography on his computer, including images of young boys who appeared between the ages of eight to 10 performing oral sex.
The principal of Sageville Elementary School in Iowa City was caught after an FBI agent downloaded eight explicit images from a computer traced to his residence.
Searching his home they found also some printed images depicting minors engaged in sexual conduct,and they intend to conduct further searches on his machine.
Burke admitted during an interview with investigators to placing a camera in the school's bathroom. 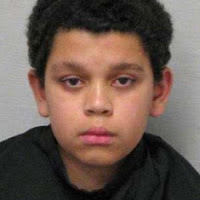 A BABY faced 12-year-old killer, who brutally beat his two-year-old brother to death is to be tried as an adult, prosecutors have revealed.
Cristian Fernandez "acted with premeditation" when he smashed his helpless brother David Galarrigo so badly that he fractured his skull causing a bleeding brain and bruising to his left eye.
He died two days after the vicious attack at his family home in Jacksonville, FL.
Assistant State Attorney Mark Caliel told said the boy acted with premeditation when he beat the toddler on March 14.
He said: "The brutal beating death of a 2-year-old is one of the factors that we must consider."

TYLAR WITT: 'I HAVE MULTIPLE PERSONALITIES'

TERRIBLE teen Tylar Witt told the court she had multiple personalities, during her ex-boyfriend's murder trial yesterday.
Steven Colver stands accused of brutally slashing and stabbing her mother Joanne, 47 at least 20 times after she handed Witt's diary containing explicit sexual details of their relationship to cops.
Colver, who at the time of the murder was 19 was sleeping with 14-year-old Witt when the pair hatched the plot to kill her, so they could carry on their relationship without interference.
He denies playing any part in the murder and instead his defense

TO the man himself even today's $100,000 price tag would be little more than chump change, but you can bet he didn't pay that sort of money for the Colt .38 when he bought it.
But the iconic gangster's nickel plated pistol is expected to go for at least that amount when it is auctioned by Christie's later this month.
It is not known whether it was used in any murders although the one time king of the Chicago rackets was thought to have personally killed several people. A spokesman for the auction house Leonie Ashfield said: "We've had film memorabilia but nothing related to the actual Al Capone in the last 10 years."

THE EVIL kidnapper, who took Jaycee Duggard and turned her into his personal sex slave for nearly two decades was "impossible to defend" his lawyer has revealed. Crazy Phillip Garrido's public defender Susan Gellman had no choice but to take the case, adding her virtually impossible task was made more difficult due to his belief that a trial would revolve around what he called "the gift from God."
She told KOVR: "He would say he acknowledged his guilt from the very beginning and he never wanted a trial. He really thought the whole case