SEATTLE MARINER star Greg Halman has been stabbed to death and his brother has been arrested in connection with the murder, cops said.
Halman was at home in Rotterdam, Holland, where police found him bleeding from a knife wound, but officers were unable to resuscitate the outfielder.
Under Dutch privacy rules officials were unable to give his name, but they said: "A 24-year-old died this morning in a stabbing and we have arrested the 22-year-old brother of the victim."
Dutch TV station NOS confirmed the news however, after speaking with his family.
There's no info on what sparked the deadly brawl between the pair.
Hallman's father was a pro in Holland and his brother reportedly play in the World Baseball Championship, but it was the 24-year-old Mariner who was the most successful battting a .230 with two homers and six RBIs in 35 games with the Mariners last season.

HOLLYWOOD legend Michael Douglas' druggie son will not be snitching on his dealer after the feds decided to dump him.
As we reported here the star's canary son, Cameron,  was sentenced to five years for dealing meth out of a high end Manhattan hotel.
But in a desperate bid to have his sentence reduced, he agreed to give evidence against David Escalera, who is charged with conspiracy for his role in a drug smuggling ring.
His lawyer last month called Douglas a "manipulator" and a "liar" in court last month, adding that he would say anything to get out of jail time.

A BROOKLYN hairdresser is suing a posh SoHo hair salon for $16 million after enduring a tidal wave and gropes and sexual harassment. It puts the lie to, er, stereotypes about male hairdressers.
Liciana D'Angelo worked at Devachan and a cut there can cost a cool $300. D’Angelo, 36, went to work at Devachan in January 2005. She said she thought co-worker Keith Magnussen was “just weird” when he complimented her on her eyes, said she was “so hot,” and offered to buy her shoes she’d admired, her court complaint says.
Married Magnussen also smacked her behind and told her he dreamed of making love to her on a salon chair, she alleges. HAIRDRESSING HARASSMENT
Posted by Crime Scene USA at 7:29 AM No comments:

Email ThisBlogThis!Share to TwitterShare to FacebookShare to Pinterest
Labels: Strange but true

A LONE wolf bomber who wanted to blow up cops and soldiers returning from the battlefiled has been busted by the NYPD.
Al Qaeda loving Jose Pimentel, 27, who allegedly wanted to change his name to Osama Hussein, dreamed of "violent jihad" was busted with pipe bombs in his New York apartment.
The NYPD counter-terrorism unit had been following him since May 2009, when inspired by the death of terror chief Anwar Al Awlaki, he began buying the equipment to make the explosives.
Mayor Bloomberg said Pimentel was "plotting to bomb police patrol cars and postal facilities as well as targeted members of our armed services returning from abroad."
Police Commissioner Ray Kelly said Pimentel was close to putting his deadly plan into action.

THE FUGITIVE wife of an escaped prisoner has been busted almost 17-years after her husband was sprung from jail.
Back in March 1995 Sara Jean Rusher's husband David Lee escaped custody at FCI Estill, SC, where he was serving time for forging securities and jumping bail and went on the run with his wife.
Together they managed to evade authorities for years until earlier this month when cops got a phone call from a "Joan Piper Duncan" telling them her husband had passed away after contracting emphysemia.
But when she couldn't tell county deputy Mark Bowen his birthday or social security number, alarm bells started ringing.
And when they performed an autopsy on the man she told them was "James Gerald Amon" her hidden life completely unravelled. 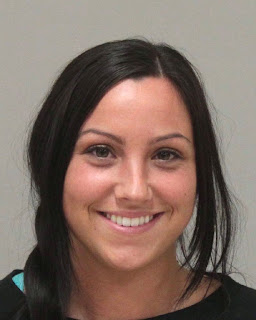 SHE MAY be a bad girl but look at that dazzling smile! Couldn't you just take her home to mom? We don't believe a word of what the police say...
Posted by Crime Scene USA at 6:00 AM No comments: