Whitey Bulger is the last of America's old school gangsters and sometime this week he will go on trial for a litany of crimes -- including 19 murders. The man who owned Boston for decades --and inspired Jack Nicholson's crazed mob boss in The Departed -- was finally run to ground after years on the run with his mob moll in 2011.
Now 83, the crime lord's platinum hair is gone and the remnants of his feared Winter Hill Gang are dead, in prison  or if they're lucky, scattered to the wind. Can the old crook pull another miracle?

"He's a survivor. He's had a very long shelf life in a profession where that is not typical," said Dick Lehr, who wrote Bulger's biography Whitey: The Life of America's Most Notorious Mob Boss "The many faces of Whitey make him intriguing," Lehr added.

MUGSHOT MANIA: I FOUGHT THE LAW AND THE LAW WON 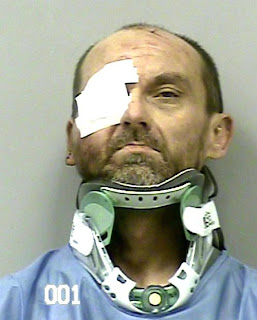 Like the old Bobby Fuller Four hit, this perp apparently decided that he too, would fight the law. And like the '60s rabble-rouser, the law seems to have won this time too.
Posted by Crime Scene USA at 9:17 AM No comments:

THEY'LL get detention for this - police detention.
A spilled cup of punch at a kindergarten graduation ceremony, led to a sidewalk brawl which saw eight people arrested cops say.
Parents at Cleveland's Michael R. White School had been looking forward to a "joyous day" police commander Wayne Drummond revealed.
But as families gathered, a couple of teenagers got into a dispute over some spilled punch and stepped outside to continue it.
The fight quickly escalated, with people picking up sticks and at least one person arming themselves with a hammer.
City schools spokesperson, Roseann Canfora, said none of them were students at the school.

Read more »
Posted by Crime Scene USA at 7:01 AM No comments:


In 1960, the lifeless body of former Miss South Texas was found face down, left to rot in a canal in McAllen, Texas. Now, more than 50 years later cops are pointing the finger at a former priest.
Irene Garza, 25, was a stunning local schoolteacher and an autopsy at the time revealed she had been raped while in a coma and was then suffocated.

TWO 'STUPID WOMEN' have landed behind bars after they stole from a store because it was on their bucket list.
Dumb duo Andrea Mobley, 36, and pal Jennifer Morrow, 38, decided that stealing from a retail store was definitely something they wanted to do before they died.
So the longtime friends walked into Walmart in Ocala, FL, and pilfered a couple of bathing suits and some beef jerky.
Mobley was also found wearing another bikini under her clothes.
She told a judge: "We were two stupid women doing something we never did before. I'm ashamed of this whole situation."
Read more »
Posted by Crime Scene USA at 6:22 AM No comments:

A BARMY llama caused high drama when cops had to taser the spitting beast before they could return him to his South Florida home.
The seven-year-old menace, called Scooter somehow managed to get out of his enclosure late Friday and decided to go for a wander on the roads near his South Tallahassee home.
His owner Jack Conrad said he couldn't exactly be sure when his six-foot creature went missing, but he'd started looking the moment he realised that he'd gone. 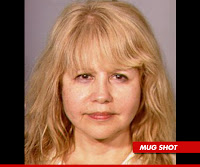 For pin-up girl and softcore porn star Pia Zadora has been busted in a Las Vegas suburb for alleged domestic viol ence. The chipmunk-cheeked wild child posted $4,000 bail and released. Cops wouldn't reveal the victim but the Lonely Lady star has been married to a Las Vegas cop she in 2005 when she reported a stalker. Zadora was most famous for her interpretations of Harold Robbins' female protogonists and generally being a sex kitten. But perhaps the greatest Pia Zadora story is likely an urban myth but wickedly funny at the same time. Zadora was playing Holocaust martyr Anne Frank in an