A FORMER Texas gym coach has been charged with having a lesbian affair with one of her 14-year-old students.
Rebecca Delagarza, 26, allegedly had steamy sex encounters with the girl in her office and the storage area of the school locker room, the victim admitted to cops.
And during their eight month affair she exchanged more than 22,000 texts with the girl, one of which was found by the girl's mom, who reported her to cops.
In addition, some of the school’s employees reportedly told police that the girl spent an extensive amount of time in Delagarza's office.
Delagarza was slapped with two charges of having an improper relationship with a student and two charges of sexual assault of a child. 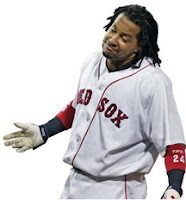 FORMER baseball legend and all round basket case Manny Ramirez has pleaded not guilty to a domestic battery charge involving his wife.
As we reported here, the 12-time All Star,  is accused of slapping his wife Juliana and causing her to hit her head on the bed's headboard.
At the time she told deputies she was afraid the situation would escalate.
Ramirez however denied striking her, telling a deputy he had grabbed her but she hit her head after he shrugged her.
Juliana had minor injuries, which included swelling on the side of her face and a contusion on the back of her head.
Ramirez, who The Broward State Attorney's office formally charged with misdemeanor domestic violence and battery, did not appear at the hearing and his attorney filed the written plea ahead of Friday's scheduled arraignment.
He is free on $2,500 bail.

Posted by Crime Scene USA at 10:03 AM No comments:

THE BRIEF and tumultuous marriage that ended with a sensational murder-for-hire plot is now over.
As we reported here, former escort Dalia Dippolito tried to bump off her husband Michael, so she could get her hands on his Boyton Beach, FL home.
But the former escort girl's plot was foiled when the former lover she'd approached to find a hitman, tipped off the cops.
They set up an elaborate sting operation and caught Dippolito's crocodile tears on video, when they told her that her husband had been killed, which immediately caused a sensation.

THE FAMILY of little Lisa Irwin have released these heartbreaking home videos showing the missing youngster.
The 11-month-old youngster has now been missing from her Kansas City home for 10 days and family members say they posted the videos to help spread the baby's image.
The videos were released at the same time an announcement was made that a wealthy benefactor had offered $100,000 for the safe reward or conviction of whoever took her.

They were taken when the tot, who's parents Deborah Bradley and Jeremy Irwin claim she was snatched by a stranger, was around three-months old.