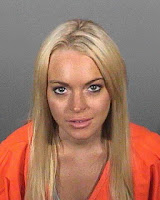 ER, how much time would I get if I pleaded guilty? That seems to be the question of the day from troubled onetime actress Lindsay Lohan. According to RadarOnline, Linds, whose career is residing on the outskirts of Nowheresville, South Dakota has asked her lawyer to try and make a deal. Apparently, Lohan's lawyer Shawn Holley, DA Danette Meyers and Judge Stephanie Sautner had a pow-wow to discuss a possible sentence. Her prelim hearing begins Friday. Radar says that at worst the former movie star turned curiosity will do a three year jolt in the big house for stealing that $2500 necklace.

A SADISTIC killer who murdered his girlfriend and an elderly couple told cops he constantly had "evil thoughts" and regularly thought about killing.
Samuel K Littleton II had been taking LSD for three weeks, when he repeatedly stabbed 26-year-old Tiffany Brown to death in the hope of getting his hands on her recent income tax return.
Then cops think he murdered 84-year-old Richard Russell and 85-year-old wife Gladis Russell  for their car.
Authorities believe he killed the Russells at their rural Lewiston, OH home, put their bodies in the trunk of their car and drove south.
Their bodies later were found in Tennessee and Georgia while their car was found in Princeton, W.Va., where Littleton, 37, has relatives.
Littleton II pled guilty to three counts each of aggravated murder and gross abuse of a corpse in a deal with prosecutors to avoid the death penalty for the

COPS hunting the Long Island serial killer have seized the laptop of an alleged New York pimp to search for clues into the elusive serial killer.
Akeem Cruz  was one of the last people to see Megan Waterman alive and while cops don't believe he is a suspect in the case, they are hoping his computer might help them in their hunt for the madman.
Like at least three other victims, she used advertising website Craigslist to advertise prostitution services, before she was last seen at a Long Island Holiday Inn Express.

A MONSTER dad killed his kids and then sent picture messages that appeared to show their dead bodies to their mom, cops say.
Gabriel Armandariz, 28, chillingly wrote, "We Love u goodbye" before sending pictures of himself with his son's Luke, two, and eight-month-old Gatlin.
Then he sent what appeared to be an image of Luke's dead body to his distraught ex, who works as a waitress in  Sudan, TX.
Officers were tight lipped about how Armandariz killed his children, whose bodies were found Thursday, after a long 10-hour search.

FOR MORE than 41 years, a Tewksbury, Massachusetts family has endured a daily nightmare. Now, that nightmare appears to be over with the collapse of a Secrecy pact. On Sept. 17, 1969 John McCabe went to a high school dance and never came home. Just 15-years-old, he was found dead in a field. He had been gagged and hogtied and had a noose around his neck. Now, three men have been

THEY CALLED him Dumb Matt. Well, maybe. 'I know,' said Matthew G. Nellessen, 19, 'let's rob dad and then we'll kill him.' The Arlington Heights, Ill. teen is now charged with murdering his father George Nellessen after he and buddies botched a robbery at their suburban home. And apparently, this dumb violent act was a long time coming.

Matthew Nellessen “has been trouble all his life,” his grandmother, Betty J. Zak, mother of the slain man told the Chicago Sun-Times. Her grandson dropped out of high school and had a string of problems related to substance abuse, she said. George Nellessen’s
Read more »
Posted by Crime Scene USA at 5:59 AM No comments:

MEMBERS OF a twisted Internet sex forum planned violent vengeance against one of the hookers murdered on Long Island, according to published reports. The New York Daily News said the talk on longislanderotic.com was outraged when one of their pervy buddies got burned for $200 after claiming he paid Amber Lynn Costello for sex--then got robbed at her home.
Here's the tone: "Tell her we are all coming over there with baseball bats."
"Humiliatrix69" raged on July 11, 2010, about getting "suckered" by Costello and company hours earlier. A pal called "italyrider" asked for her address: "No one from this board needs to be involved. I have friends who can take care of this s---."
Costello is one of 10 bodies found dumped along Gilgo Beach and Jones Beach. 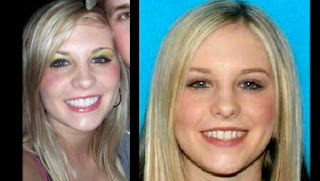 AS THE clock ticks fears are mounting for the safety of a 20-year-old Tennessee nursing student who was brazenly kidnapped Wednesday. Holly Bobo was dragged into the woods near her home in Darden by a man wearing camouflage. Now, detectives are pleading for the public's help in finding her.
The pretty blonde is the cousin of country singer Whitney Duncan who is offering her prayers and support to the family.

NICOLAS CAGE has reemerged. This time he's drunk and accused of domestic battery. The brouhaha unfolded in the Big Easy when the Oscar-winning actor went on a booze-a-ramma in the French Quarter. It began when Cage began arguing with his wife. "He and his wife were standing in front of a residence that he insisted was the property the couple was renting," Flot said. "She disagreed, and Cage grabbed her by the upper arm and pulled her to what he believed was the correct address."
Posted by Crime Scene USA at 5:19 AM No comments: