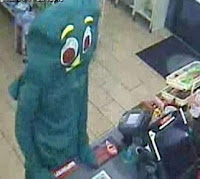 REMEMBER when Gumby tried to rob the 7-ELEVEN, but failed because he couldn't get his gun out of his costume. Video footage here.
Well now he's been charged with burglary - or at least Jacob Kiss, 19, the idiot who wore the costume has.
His pal Jason Giramma, also 19, who didn't even have the gumption to don a disguise has also been charged.
They were such bad thieves that when the costumed clown walked into the San Diego convenience store and demanded cash, the clerk thought it was a joke and ignored the life sized Claymation character, he carried on cleaning up.

A PREGNANT teacher has been busted for having sex with a student at a boarding school for kids with special needs.
Brittany Larson allegedly slept with the 16-year-old boy at the Devereux Glenholme School in New Milford, CT, which caters for young people who have been diagnosed with Asperger's, ADHD, OCD, and Tourette's syndrome, between the ages of 10 and 18.
School officials are said to have learned of the allegations and contacted police, after hearing she had sex with the student, 16, on school grounds, according to the Hartford Courant.
They quickly moved in to arrest the 27-year-old, who's first child is due in mid December according to an online baby registry.

Read more »
Posted by Crime Scene USA at 6:36 AM No comments:

REMEMBER Eddie Long, the megachurch pastor who's definitely not gay - even though he paid off four teenage boys, rather than fight their allegations of homosexual behavior, which we reported, here.
Well now, ten former members of his New Birth Missionary Baptist Church in Lithonia, GA are suing the oh so clean pastor for conspiring to defraud them out of their retirement savings.
Their saying that he used his powers as a pastor to persuade them to invest in the financially troubled City Capital Corp at investment seminars hosted by the church.
The plaintiffs said in a lawsuit that in 2009 Long invited Ephren Taylor, then CEO of the company, to speak at New Birth, where he told them they could get rich. 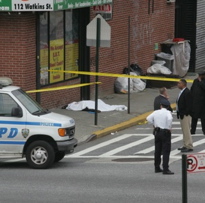 A PREGNANT mom was tragically killed as she bravely shielded her children a gunfire erupted outside a New York school yesterday.
Zurana Horton, a mother of 13, gave her own life to protect the kids, who she'd just picked up from school after classes were dismissed about 2:35pm.
Bullets also struck and 11-year-old and a 31-year-old woman walking out of P.S/I.S 298.

Read more »
Posted by Crime Scene USA at 5:40 AM No comments: