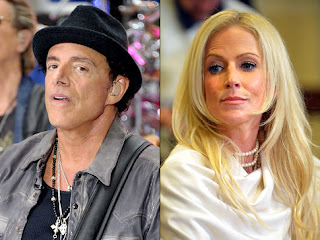 UPDATE: OK, first chronic attention seeker Tareq Salahi said his bimbo wife Michaele had been kidnapped after going to the hairdresser. Not so, say our friends at TMZ. Seems Michaele has been playing hide the sausage with Journey guitarist Neil Schon. Apparently, the pair have been engaging in sexcapades for months. Tareq thinks she's being held against her will. BREATH EASY: MICHAELE SALAHI NOT KIDNAPPED, JUST BANGING JOURNEY GUITARIST
EARLIER:  HAS Michaele Salahi been kidnapped or is this just another of her bat-shit crazy attention-seeking schemes. According to her hubby Tareq

THE DEATH machine in Texas is ready to roll and got it's first taste last night. The Lone Star State is slated to execute four killers over the next two weeks. At 6:22 p.m. last night, Steven Michael Woods Jr., pictured left,  took the journey to oblivion and lashing out: "You're not about to witness an execution. You are about to witness a murder." He maintained his innocence til the end in the brutal slayings of Ronald Whitehead, 21, and Bethena Brosz, 19, in 2001. Co-defendant 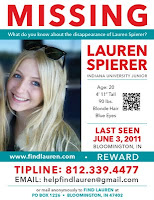 UPDATE: Police in Indiana say the body they found in a woods on Tuesday is not that of missing Indiana University co-ed Lauren Spierer. They did not say who it was or release the results of an autopsy on the corpse.
EARLIER: COPS IN INDIANA are being tight-lipped on whether a body discovered in rural Jennings County could be that of missing co-ed Lauren Spierer. Emergency officials had to use ATVs and four-wheel drive vehicles to investigate, Jennings County Sheriff Steve Hoppock said in a news release. It appeared the body had been there for some time, he said.
State Police crime technicians were called to the scene, as was the Jennings County coroner’s office.

HEY, isn't that Jose Baez? You know, the shyster who got Party Mom Casey Anthony off the hook in the murder of her daughter Caylee? Yes! It is. Is he vacationing in the islands? No! He's down to rescue creepy old Gary V. Giordano from the hangman's noose in the disappearance and likely murder of Robyn Gardner.  CASEY LAWYER RIDES TO RESCUE
Posted by Crime Scene USA at 7:40 AM No comments:

SHE'S clearly plane crazy.
Mad Mary Purcell was so worried about her mom and brother flying to New York on the eve of 9/11, she tried to ground their flight, by twice phoning in bomb threats.
The loony loser ex-con claimed there were explosives on the Southwest Airlines plane they were taking from Arizona, sparking a huge security response at Tuscon International Airport. 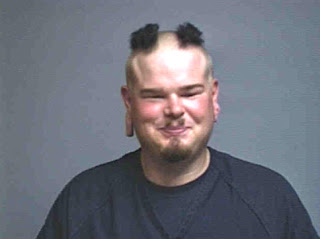 WORDS FAIL US. We don't even know what to say about this guy. Oh, we could but it's just a really brutal head. Winning.
Posted by Crime Scene USA at 7:31 AM No comments:

THEY might have a substitute teacher for some after this kindergarten teacher was busted setting a very bad example to her young students.
Dorothy Christine Ramirez, a 25-year veteran at Easterby Elementary School in Fresno, CA, was caught with methamphetamine and a knife on school grounds.
Se was driving with Joseph Frago, 28, when Sheriff deputies pulled them over and according to the Fresno Bee they found a black sunglasses case next to Ramirez's purse.
She allegedly told them it belonged to her, but when they opened it two grams of methamphetamine were found in it.

Read more »
Posted by Crime Scene USA at 7:16 AM No comments:

SHE knew that having "amazing sex" with the boy she was supposed to be looking after, even writing it in her diary, but Loni Bouchard could help herself.
The 20-year-old professed her love for the 14-year-old, adding that she had finally found "the guy who treats me right."
She wrote: 'I don't care about the law. I just want to be with him and not have to hide it. How can the law tell us who to fall for, who to like and who to love and especially who to date? I thought America was a free country."
At one point she mentioned the "amazing sex" they had had together.
Bouchard of Clinton, CT, was busted after the boys mom found they'd been sending messages to each other Facebook.

CASEY Anthony's parents offered little or no insight into the case that gripped America in their first interview since their daughter was sensationally cleared of murdering their granddaughter Caylee. Cindy Anthony listed a host of possible medical problems including gran mal seizures to a brain tumor to postpartum schizophrenia to explain what may have led to 2-year-old Caylee's death and her daughter's callous behavior afterwards.
She told Dr Phil: "I'm not making excuses for her. I want to find out what's wrong with Casey. I know that there's something wrong."