HE WAS just 5 when he watched in horror as his father strangled the life out of his mother. Robert Sturcz then watched as his father dug out a grave in their East Vancouver basement.


"I remember [my dad] calling me down to the basement," Sturcz told the Vancouver Province. "I was the only one home. I came down, he's choking her out and then I seen her collapse and he says, 'Watch her, make sure she doesn't move.' He had his fat fingers around her neck and squished it. That's what I saw."

That was 32 years ago. Now, cops and archeologists are excavating the housing unit in search of the body of Katherine Mary Brown, who 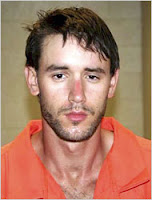 DIALING FOR DEATH. One of the thugs accused of slaughtering a woman and two young girls in a botched Connecticut home invasion is begging for his life. Now, lawyers for Joshua Komisarjevsky say their client is offering to plead guilty to avoid the death penalty.
In July 2007, cops say Komisarjevsky and Steven Hayes broke into a home in Cheshire; beat and tied up Dr. William Petit; raped and strangled his wife, Jennifer Hawke-Petit; molested one of their daughters; and set the family's house on fire before attempting to flee.
Both daughters -- 17-year-old Hayley Petit and 11-year-old Michaela Petit, both of whom had been tied to their beds -- died of smoke inhalation. Petit escaped to a neighbor's home. Hayes is already destined to get the needle. Komisarjevsky's mouthpieces say Hayes committed the most heinous acts.

THE CARNAGE of American cops continues. On the weekend police officers were killed in New York and Virginia in three separate incidents.
* In Vansant, Virginia a gunman unleashed a barrage of bullets killing two sheriff's deputies investigating  a salvage yard robbery. Two other Buchanan County sheriff's deputies were also gunned with one having life-threatening injuries.
According to cops, the salvage yard's owner told them he was being robbed. When they arrived, the gunman started firing. The gunman was later found dead. Few details are available.
COP SHOOTINGS IN VIRGINIA
* On Long Island, a police officer was accidentally shot and killed during a confrontation Saturday between cops and a knife-wielding thug. Geoffrey Breitkopf, 40, was shot and killed by an MTA cop in the front

JOKER, Penguin, Two Face and whole host of comic book villains would probably be distinctly unimpressed by this comedy caper.
Wearing a blonde wig, glasses and a bandana, Mitchell Baum, 17, walked into a Detroit comic book store, flashed what looked like a home made bomb, before handing a note to the clerk demanding several boxes of Yu Gi Oh game cards which retail at about $90 a pop.
The clerk at the "Fun 4 All" store says the teen claimed his uncle was forcing him to do it and that if he was not given what he was asking for, his uncle would detonate the device.
Still he alerted his boss and security who quickly called police.
But rather than carry out his dastardly plan the teen actually paid for several items and left without the cards on the note.
Quickly picked up by Cops he was arrested and the Michigan State Police

"SCORE" LOSER TURNS HIMSELF IN

SCORE loser Travis Jones who allegedly shot a man over the score in a basketball game has turned himself in after more than two years on the lam.
Travis Jones, 21, was keeping score when he got into an argument over the points tally with Carleak Gibbons.
According to NY prosecutors he then left to fetch a gun and fired off six shots, hitting Gibbon's in the stomach, before escaping in a Dodge Charger driven by an accomplice who was soon caught.
While Gibbons recovered, Jones disappeared, hiding out in an undisclosed location all this time.
But after he appeared Staten Island's most wanted fugitives, Jones' lawyer reached out to negotiate the terms of the surrender, a DA spokesman said.

THE murder of a civil rights campaigner who's 1965 death was called an "American Tragedy" by then President Lyndon B. Johnson is being re-investigated by the FBI.
Martin Luther King Jr had invited the Rev James Reeb down to Selma, Mississippi - which was at the center of voting rights demonstrations at the time - to take part in a protest march to Montgomery.
But the Boston based minister never made it as he was set upon by angry white mob and beaten in a brutal attack, dying two days later from his injuries.
Three white men — Elmer Cook, William Stanley Hoggle and Namon O'Neal "Duck" Hoggle — were
Read more »
Posted by Crime Scene USA at 7:35 AM No comments:

Email ThisBlogThis!Share to TwitterShare to FacebookShare to Pinterest
Labels: MLK

A FIERY love affair literally ended in flames when a man doused his girlfriend in gasoline and set her alight, Cops say.
In front of her terrified mother, Jesus Alvarez dragged Margarita Blanco, 42, from her Miami Dade home drenched her in gas using a five-gallon container before setting her on fire.
Her family said was a tragic conclusion to a relationship marred with violence.
Julia Mendez, Blanco's grief stricken mother said: "He came in and took her out by the hair. He grabbed her and punched her over and over and right there he threw her on the floor while punching her.
"He beat her wherever: there, here, inside my own house, in the street. He beat her in front of people. He didn't not care."
While her 19-year-old son Andrew called Alvarez: "A person with nothing in his life."