A two-year search for missing Missouri mother of triplets Jacque Sue Waller has ended in heartache. Cops say the pretty blonde 39-year-old's remains were discovered Wednesday.
Waller was last seen on June 1, 2011 shortly after she attended a meeting with her estranged husband, James "Clay" Waller to discuss their impending divorce. Her SUV was later found abandoned by the side of the highway near Fruitland, MO. -- several miles away from her house. 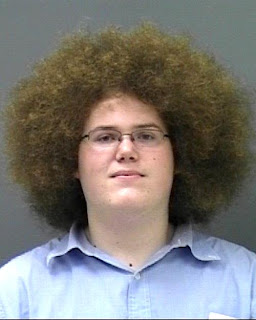 No, really. That's quite the 'fro and our geeky burrhead looks like he would be right at home as a cast member of the beloved sitcom. Our guess? Stealing from the comics shop.
Posted by Crime Scene USA at 8:18 AM No comments: