MICHELLE PARKER'S DAD: 'I THINK EX-FIANCE DID IT'

THE FATHER of missing Orlando mom Michelle Parker told Nancy Grace last night that he believes Dale Smith Jr., her ex-fiance, is behind the pretty brunette's disappearance. The tumultuous couple came into the spotlight after they appeared on The People's Court. She vanished the next day.
Posted by Crime Scene USA at 7:50 AM 3 comments: 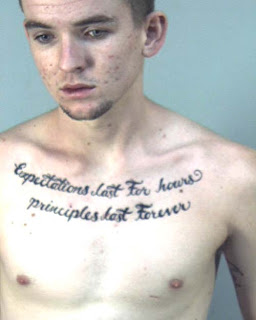 IN THE past, an inspiring like this guy would sneak out a letter from a jail, like say in Birmingham. Now, you get a tatt. "Expectations last for hours, principles last Forever." Damn straight.
Posted by Crime Scene USA at 7:30 AM No comments:

A VEGAS chainsaw massacre has seen a couple charged with killing a man and then dumping his body in the street.
Cops say maintenance man Anthony Stiger and his wife Melanie Constantini, both 20, murdered Harold Myles Shilberg, before abandoning their apartment and going on the run.

DIRTY Jerry Sandusky allegedly abused one young boy more than 100 times and then threatened his family to keep quiet about his sordid encounters, one of his victims has revealed.
The scandal hit former Penn State football coach allegedly began abusing the man now 29, when he was just 10-years-old after meeting him through his charity, The Second Mile Organisation.
His lawsuit alleges: "The sexual abuse occurred on multiple occasions and at multiple locations within Pennsylvania and outside of Pennsylvania; in the facilities of Penn State, particularly the football coach's locker room."

DEADLY Dutchman Joran Van Der Sloot is rubbing salt in the already deep wounds by launching an astonishing $10 million lawsuit against his victim's father.
The shameless accused killer, who allgedly admitted to cops that he killed Peruvian student Stephany Flores in a Lima hotel room is claiming his human rights were violated when he was extradited from Peru to Chile, to face murder charges.
He reportedly confessed to killing the 21-year-old after he found her reading about the Natalee Holloway case on his laptop.

REMEMBER this douchebag who drove the million dollar Bugatti Veyron supercar into a Texas swamp?
Well now a jury will have to decide whether Andy House was trying to scam an insurance company in an audacious bid to double his money.