CASEY ANTHONY: THE MOMENT SHE WAS CLEARED

THIS is the amazing moment when Casey Anthony was found not guilty of the murder of her daughter, Caylee:

Clearly shaken, the one time party mom shed a few tears as the clerk of the court read the astonishing verdict that she was cleared of the murder.

CASEY ANTHONY'S legal team proved Tuesday that bullshit does indeed baffle brains.Twelve of Florida's biggest fans of CSI: Orlando found the hard-partying monster mom not guilty of first-degree murder. Can you believe it? We can't. Anthony, 25, was cleared of murdering her 2-year-old daughter Caylee in 2008. She could have gotten the needle for the evil deed. She was also cleared of manslaughter. She was found guilty of lying to cops. Huh? After the verdicts were read, the promiscuous Party Mom hugged her lawyers. The five-man, seven-woman

Email ThisBlogThis!Share to TwitterShare to FacebookShare to Pinterest
Labels: Casey Anthony, Caylee Anthony, juries that watch CSI too much, not guilty, party mom 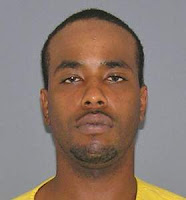 MEET the most evil man in America: Lenny Love Jr. Love, 29, told cops he was HIV positive when he allegedly raped a 6-month-old baby. Now, people from around the world are furious the sick monster is only be charged with rape and are calling the Silverton, Ohio PD to protest.
One caller from Mississippi said he wanted to kill Lenny Love: "Yes. Ya'll should charge dude with murder. Ya'll should kill his ---. I'll kill him if I ever see him."
Another added: "I'm disgusted as a parent and as a teacher. These kids come to us. They survive and they're just messed up from the very beginning."
According to cops, Love marched into the police station Saturday and 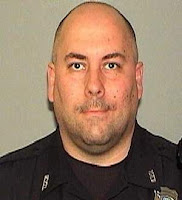 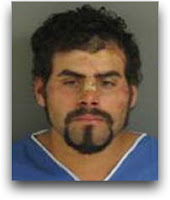 IT WAS an astonishing confession: Mark Geisenheyner told a friend he hadn't seen in decades that he had just shot 5 people in suburban Philadelphia. Just showed up at the buddy's house. The unidentified buddy quickly sent his wife out of the house and preyed he wouldn't be murdered. When Geisenheyner, 51, finally crashed his buddy got out of the house and called the cops.
According to the pal, Geisenheyner told him of the man he wanted to murder, Paul Shay: ""Guess you never thought you'd see me again." Then he shot Shay point blank in the head.  According to the The Philadelphia Inquirer: Geisenheyner had a long criminal history in Pennsylvania, Massachusetts, and New York. Some of the crimes were related to insurance fraud.
Geisenheyner was identified as the lone suspect in the shooting deaths of two
Read more »
Posted by Crime Scene USA at 10:16 AM No comments: 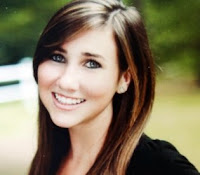 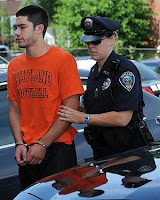 MASSACHUSETTS cops have arrested an 18-year-old in grisly murder of Lauren Astley, also 18. Her body was discovered early Monday in a marshy area. Cops say Nathaniel Fujita is expected to be arraigned this morning. It's believed she was stabbed in the neck.
Earlier, The Boston Herald spoke with her heartbroken father for anyone who knew anything about the case to come forward. The recent high school graduate had a missing two minute period, according to Malcolm Astley. He said: “What I’m most concerned about now is whether anybody can step forward and provide information on the time slot from 7:45 p.m. to

PRETTY WICKED HEAD, HUH? Because of tech troubles and the July 4th holiday we missed posting our weekly episode of Monday Mugshot Madness. Hope this makes up for it. Don't know his name, don't know his alleged crime but...look at that head! Thanks to mugshots.com
Posted by Crime Scene USA at 9:37 AM No comments:

SMASHING into the parade, she narrowly missed children in the crowd as she raced at speeds of up to 80 miles-an-hour.
Crazy Gloria Hodge scattered the terrified crowd as she cut through the procession at Randolph, RI and continued up the Interstate 95.
An onlooker said: "She drove straight into the parade, almost like she didn't see it. She must have been doing at least 40 or 50 miles-an-hour
"People were just dipping and dodging out of her way, terrified that she may hit them. Lord knows what she was thinking. It was certainly a parade to remember. People will be talking about this for years."
Hodge eventually smashed her car into a highway bridge.

WHO hasn't given flipped someone off while driving?
It's not pleasant and definitely not polite but at some point behind the wheel we've all given someone the finger.
So you can imagine Steve Pogue's surprise when he was pulled over and given a ticket for doing exactly that.
Pogue was driving through St Louis, MO, when another driver clogged the intersection in front of him, leaving him no room to go, when his light went green.
Needless to say, he wasn't too happy.
He told KSDK: “The arm was there and I'm not proud but I showed my displeasure of them blocking the intersection.”
Basically, he gave him the finger.

Email ThisBlogThis!Share to TwitterShare to FacebookShare to Pinterest
Labels: Bad driver, Flipped someone off, Steve Pogue, The Bird, The Finger

NO VERDICT YET IN CASEY ANTHONY TRIAL

DAY one and the jury who are potentially going to decide whether Casey Anthony gets the death penalty, took their time and ended with no verdict.
From about midday they debated for almost six hours following the prosecution's closing speeches and instructions from judge Belvin Perry.
Before sending them out the justice reminded the jurors that it is not up to the defendant to prove their innocence, adding that a defendant choosing not to testify it is not an indication of guilt.

UPDATE: The woman's body found in an Indiana creek Sunday probably isn't missing blonde co-ed Lauren Spierer, the Marion County Coroner said today. The badly decomposed body was taller than the 5-foot-nothing Spierer, who has been missing for a month.
Indianapolis police have been in contact with cops from Bloomington and Noblesville, Ind., who are investigating the June 13 disappearance of 74-year-old Dorothy Heard.
**************************************************************
EARLIER: THE TRAGIC case of missing student Lauren Spierer may be solved within days if the decomposing remains of a female body turn out to be her. Cops refused to speculate on how long they had been there but an autopsy soon,

Read more »
Posted by Crime Scene USA at 4:08 AM No comments: