THE LAWYER REPPING boozing Boston TV boss Randi Goldklank wants charges that she performed a strip tease at a Florida restaurant dropped. A "misundertanding" "spiraled out of control" "nonsense." The usual excuses from a high-priced mouthpiece.


“There was a verbal misunderstanding between things that were said and things that were done by Ms. Goldklank and others in the establishment,” Miami attorney Brian Bieber (no relation) said.

A SEX FIEND serving a life sentence has now been charged with the vicious 1983 slaying of a Chicago book store owner who was raped and strangled. New DNA has linked Joseph Walker to the murder of Frieda Fenster, 77. He has denied being involved.


In fact, the Chicago Sun Times reports that the super stud told detectives: "he never would have had sex with an old white lady" or step foot inside a bookstore because “me and books never get along,” Assistant State’s Attorney Daniel Weiss said

Police found Fenster's in the back of Stein's Book Store on Dec. 16, 1983. There was still money inside the till and cops quickly pegged it as a sexually-motivated murder. Walker, who was born in Arkansas, had been 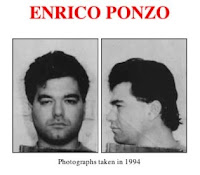 JAY SHAW WAS an outgoing, happy go lucky neophyte cattle rancher. But in reality, Jolly Jay was a Boston triggerman who did the Mafia's bidding--then vanished 20 years ago. His name is Enrico M. Ponzo and yesterday in a federal courthouse in Idaho, the 42-year-old pleaded not guilty to racketeering and plotting to murder.

SEXUAL CONTACT with animals is never a recipe for lasting happiness. Just ask former groom Esbin Cal-Orozco, 29. The Chicago man was put on probation and ordered to undergo psychological counseling after he was found guilty of sexually fondling a female racehorse at Arlington Park Racetrack in the Windy City. He had face three years in prison.


“I believe this defendant is in dire need of counseling,” Judge Thomas

A CROSS dressing bank robber dubbed the "Tootsie Bandit" because he wore makeup, a wig and sunglasses during his heists has pleaded not guilty.
Robert Deon Tyndall II,  56,  stands accused of two counts of robbery and one count of attempted robbery.

He is suspected of robbing Inland Federal Credit Union in El Cajon last July 16 while dressed as a woman with a blonde wig, black blazer and purple blouse.
The name "Tootsie Bandit" refers to the 1982 film "Tootsie" that starred a cross-dressing Dustin Hoffman."

A GRABBING granny who is being played by Halle Berry in an upcoming movie has been sentenced to five-years behind bars for stealing a ring.
The Oscar winner has the title role in "Who is Doris Payne," but she may now have to change the ending after Payne was jailed.
Doris "The Pincher" Payne who has a decades-long criminal history has been sentenced to five years in prison for stealing an $8,900 diamond ring from a Macy's department store in San Diego.
Judge Frank Brown said Payne deserved the maximum sentence for burglary and grand theft

OSAMA Bin Laden in no longer America's most Wanted, after being dethroned by another Al Qaeda leader.
American born Anwar Awlaki, preaches hate filled messages online encouraging lone wolf or small cells, which are almost impossible to trace, to attack American targets.
Now believed to be in Yemen, he isnumber one on the CIA's kill and capture list, according to Michael Leiter, head of the National Counterterrorism Center.
Testifying before the Homeland Security Committee at a hearing on Islamic
Read more »
Posted by Crime Scene USA at 6:46 AM No comments:

REAL Housewife of Atlanta, Rashidah Ali is being sued for $10 million  for her part in a New York nightclub brawl.
Ali, who calls herself a "shoe consultant to the stars," allegedly clawed bouncer Joe Wright, slicing him from his hairline to his mouth, severing an artery and leaving him needing 50 stitches.
His civil suit claims she got aggressive when the Greenhouse Nightclub doorman tried to eject two belligerent party-goers from the VIP section during Ali's birthday blowout.
"I felt her hand reach through and start grabbing at my face," he told The Daily News.
"She's clawing over my eye, at my face, and I didn't feel anything at first...Then I realized I felt the blood dripping down my shirt. I was leaking."

A TWISTED teen who shot his sleeping stepsister 10 times in the head has been sentenced to life after pleading guilty to murder.
Trish Troglen was asleep on the couch, when Eric Whitehead, then just 14-years-old blasted her head with a rifle.
He told investigators that he'd woken up enraged, after dreaming that he'd been arguing with the woman he described as his: "best friend."
Charged an adult, the troubled teen who had a tendency to run away an get into trouble was sentenced to life in prison with the possibility of parole, although he may be eligible for release in 30 years.
Investigators say Whitehead had a history of psychiatric problems.
Following the fatal incident he underwent two mental examinations - both found him competent to stand trial, Assistant District Attorney