WE BLAME public service unions for this one. Well, we kid. Meet Greedhead Tim Durham. Occupation: financial services. The Indiana bidnessman is now the latest corporate crook who screwed people out of oodles of money. Now known  as the largest corporate fraud in Indiana history, Durham has been hammered with 10 counts of wire fraud, conspiracy and security fraud.
The judge even suggested he was lying during a recent court appearance regarding his assets.

COPS  are planning a massive search for a missing teen who vanished when she was visiting her family.
Honor's student Phylicia Barnes, 17, vanished without trace three months ago on a trip from her North Carolina home to see her three older half siblings in Baltimore.
Cops suspect foul play but there have been few clues into Barnes' whereabouts, but new information has led them to an undisclosed wooded area for signs of the missing teen.
About 200 volunteers are expected to join officers the canvas the neighborhood where she was last seen.

THE pistol was aimed right at his head but hero Robert Wood refused to back down, telling the thief: "No."
At first the 61-year-old thought it was a joke and didn't take the threat seriously as the bandit stuck the gun in his face and demanded money in the Boston, Mass bank. 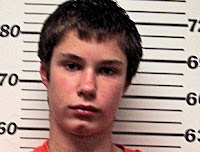 BAREFOOT bandit, Colton Harris Moore is expected to make a blanket plea agreement to avoid trials in more than a dozen jurisdictions, his attorney has revealed.
The troublesome 19-year-old who has no formal flight training, pilfered at least five planes and dozens of car and boats as he evaded capture for a string of burglaries over the last two or three years.
Eventually, he flew a light plane from his home in Vancouver Island to the Caribbean, landing in the Bahamas, where a $10,000 FBI reward and a huge law enforcement team caught up with him.
But rather than face separate trials across the country his lawyers are working out a deal for him to plead guilty for everything in one go.
Read more »
Posted by Crime Scene USA at 5:43 AM 1 comment:

A CONVICTED sex offender killed a homeless man to fake his own death and evade rape charges cops say.
Michael A. Gilbert, 42, is accused of shooting the man who he thought resembled him, stuffing him in the trunk of his car and then setting it on fire.
Although he'd left his license in the car, dental records proved the dead man was not Gilbert, but officers in Fort Worth, TX, are still baffled as to who the man is.