UPDATE: He is a number no more. Chicago law enforcement officials have identified the remains of  another of twisted serial killer John Wayne Gacy's victims. DNA evidence revealed that the corpse known for decades as Victim No. 19, found in the monster clown's basement, is William George "Bill" Bundy, 39. Bundy had been reported missing Oct. 27, 1976, and his family always believed that he might have been a Gacy victim. But the only identification tool available at the time was dental records, and Bundy's records had been destroyed by

THE HOT-HEADED  former fiance of missing Florida mom Michelle Parker has now been named the primary suspect in her disappearance, Orlando Police Chief Paul Rooney said. She disappeared a week ago after an emotional appearance on The People's Court. Cops have named Dale Smith Jr. their primary suspect. MORE ON PEOPLE'S COURT DISAPPEARANCE
Posted by Crime Scene USA at 7:55 AM No comments: 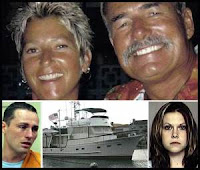 THOMAS and Jackie Hawks were a well-loved hard-working couple who were living their dream, living on a California yacht. But the retired couple had just become grandparents and were anxious to spend more time with family back in Arizona.
On Thanksgiving 2004 they disappeared. Police believed they were murdered on their yacht at sea, and ultimately closed in on former child actor Skylar Deleon as their killer.
CRIME LIBRARY HAS MORE
Posted by Crime Scene USA at 7:46 AM No comments: 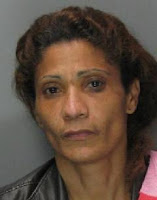 YOU DON'T piss off Carmen Basulto. Her unnamed estranged hubby quickly discovered that when Carmen, 43, showed up at her daughter's house on the weekend with a couple henchman and kidnapped him at gunpoint. The hubby had been living with his stepdaughter after separating from Basulto, cops said. The stepdaughter alerted detectives and they found the man unharmed--except perhaps his pride.  Cops are still looking for "two of the three suspects" who are described as two men: One in his 30s who is heavy set and was wearing a gray scarf, black sweater and hood over his face -- and the other, who is reportedly tall and thin, wearing a black sweater and hood over his face. Basulto was arrested Sunday.

MUGSHOT MANIA! THEY CALL THIS CROOK 'THE CHIN' 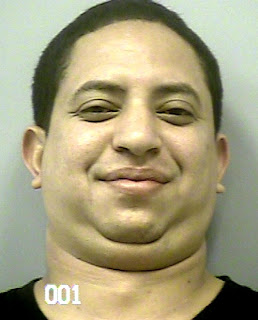 EVERY baddie needs a Nomme du Guerre. And we think this chap's is perfect because in his town, they call him The Chin.
Posted by Crime Scene USA at 7:22 AM No comments:

Email ThisBlogThis!Share to TwitterShare to FacebookShare to Pinterest
Labels: Mugshot Mania, The Chin 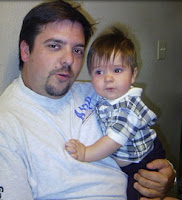 THE COLD case of a man who mysteriously disappeared from a Boise McDonald's seven years ago is starting to heat up, cops say.
Investigators received an anonymous letter with new information about the disappearance of Ahren Barnard, who vanished seven years ago this week and they say it's

ANOTHER day, another potential victim of accused Penn State Pedophile 'Dirty' Jerry Sandusky comes forward.
Cops say they've received a letter from another man claiming to have been sexually assaulted by the once highly respected football coach.
And Penn State police Sergeant Bill Wagner told The Centre Daily that the note from the man who is in jail in Oklahoma had been: "Turned over to the Attorney General’s Office for further investigation."
As we reported here, the defensive coordinator described as a "sexual predator" by attorney general Linda Kelly is charged with more than 40 offenses against eight young victims - one of whom maybe his own grandchild.

TALK about the doghouse!
Jason Good would probably prefer to be in a den of hungry lions than at home at the moment, after his wife found footage on his cellphone of her mom using the bathroom.
The 40-year-old pervert's missus was astonished to find a "video of an adult female using the restroom" cops said.
Then she was even more horrified when she realized it was her 57-year-old mom and it had been taken in their Laurel, VA home and she immediately called in the cops.
When officers arrived she directed them to "a hole located in the wall between the garage and the bathroom" the police statement revealed.

A BEER sodden booze hound was so desperate for another drink that he launched a ferocious hatchet attack when he was refused another drink.
Mad Maykel Borges was hanging around at the Trailerama (brilliant name) trailer park in Miami and asking for beer, which some of the residents gave him.
But as he continued to demand more drink, he was eventually asked to leave.
The barmy booze hound did in fact go but he then returned armed with a hatchet and then he bgan to argue for more beer with the residents.
When they again refused his requests he started swinging at one man, cutting him on the side with it and drawing blood.
One terrified resident told CBS Miami: "This guy was crazy. He just kept asking for beer and he went mad when we wouldn't give him anything so he just started swinging.

A DEATH row bound double killer has mocked Oregon governor John Kitzhaber, claiming he "didn't have the guts" to carry out the execution.
Two-time murderer Gary Haugen called the lawman "a paper cowboy" adding that, "he couldn't pull the trigger," after Kitzhaber refused to execute him.
Haugen has voluntarily given up all his legal challenges, claiming he wants to be executed, to protest against the criminal justice system he views as broken.