HE'D just been jailed for disorderly conduct, but he decided he needed help, so who does he call? Why the cops of course.
Complaining about his situation, Joseph Walsh told an stunned emergency dispatcher: "They got me in handcuffs in the county jail, and I can't get my phone call, can't do nothing"
Asked about how he was able to speak to them, and his whereabouts because he was using his cell phone Walsh replied: "I am in the county jail. Well, it's not the county jail, it's the holding cell."
The Sandusky Register reports Walsh had been handcuffed to the door of his holding cell because officers said he wouldn't calm down, and they were afraid he would hurt himself or cause damage. Walsh was arrested in a dispute outside a Sandusky OH bar.
Police took Walsh's cell phone away after the call was placed, according to WTOL.
He now faces an additional count - misuse of 911.
Posted by Crime Scene USA at 10:02 AM No comments:

She was also charged with misdemeanor counts of theft and aggravated battery for running out on a restaurant tab and then striking the police officer with the sex toy last November.
On Monday, she pleaded guilty to the DUI and theft charges. She was sentenced to 30 months probation and six months 'periodic' 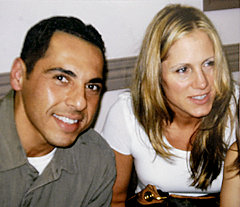 HEARTACHE in the Bronx. The body of a missing mother of four has been found and fingers are pointing at her abusive ex-cop husband. The body of Tina Adovasio was discovered in a wooded area of Westchester County, north of New York City Wednesday night.
So far, no cause of death but cops believe the pretty 40-year-old was choked to death.
Now, her thuggish ex-hubby, Edwin Coello, 40, is expected to turn himself in. Coello's marriage was marked by frequent violent domestic disputes and she finally filed for divorce last month. Then, she took out a restraining order--apparently to no avail.
According to the NY Daily News: During questioning after her disappearance, Coello seemed to be the
Read more »
Posted by Crime Scene USA at 9:12 AM No comments:

BIOLOGY TEACHER? Okay, can the snickers. Carrie Shafer was a high school biology teacher at DuPont Manual High School (more jokes there) until Friday when she was pinched half naked and knocking back beers in a car with a student. The Louisville party girl, 38, a favorite of students has now resigned.Evidence of contraceptive use was visible near the vehicle.


"There were some articles found that appeared to have been from a sexual act -- like some condoms and some wet wipes that were on the outside of the vehicle believed to have been thrown from that vehicle," Louisville Metro Police spokesman Dwight

Read more »
Posted by Crime Scene USA at 8:53 AM No comments: 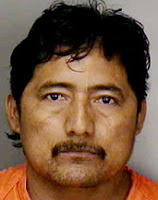 A VAMPIRE who battered his roommate to death and then drank his victims blood from a plastic cup has been sentenced to 20-years behind bars.
Mauricio Mendez Lopez, 42, murdered Macario Cruz because he disapproved of a steamy relationship between him and his niece Mariella.
After striking Cruz, 32, with an iron bar he'd chased them with a knife, threatening them with death if they didn't end it.
But the passion between the pair was too strong and when Lopez found out he repeatedly stabbed Cruz in a mad rage.
Scooping some of his blood into a cup he then drank it.
He later claimed that there is a ritual in his native Mexico where a person drinks a victim's blood to evade law enforcement.
The Gods clearly weren't with him however and authorities quickly caught up

A TWISTED pedophile lured children to his home by hosting ice cream eating contests, but laced their sugary treats with drugs to sexually molest them - and then posted videos of his assaults online.
James Phillip Edwards used prescription sleeping pills to drug his victims, all girls aged six to 13, before molesting them in the basement of his Kansas City, MO home.
Over a four year period he then used his webcam to tape his assaults onto his computer, which he then sent to other perverts.
He pleaded no contest to 12 counts of producing child pornography, one count of attempting to produce child pornography, and five counts of distributing a controlled substance to the victims without their knowledge in order to facilitate a crime of violence.
Prosecutors said they accepted the plea to avoid the victims being forced to

A BEAUTIFUL, talented and extremely popular Rutgers student has been beaten to death by her boyfriend.
Pamela Schmidt's body was found in the basement bedroom of her boyfriend William Parisio, a fellow student at the prestigious university with a history of substance abuse and mental illness.
It's believed Parisio, who was diagnosed with bipolar disorder had been taking bath salts, the latest wave of over-the-counter chemicals used to get high.
His mother Dianna, who discovered the body at around noon Sunday said they made her son incredibly paranoid after taking them.
It's thought he'd been taking bath salts, which can cause

CHILD KILLER, 11, MAY NOT BE TRIED AS AN ADULT

CHILD killer, Jordan Anthony Brown, who blasted his father's pregnant fiance with a shotgun, killing her and her unborn child may now be tried as a juvenile.
Previously prosecutors had tried to have him face adult charges for the murder of Kenzie Houk, when he was just 11-year-old.
Using his own shotgun, designed for kids, he is accused of shooting her and then walking her eight-year-old daughter to school.
Now a three-judge panel has reversed that ruling, which means if convicted Brown, now 13, will be freed by the age of 21 instead of facing life imprisonment like an adult would.

SUPERMODEL Jessica White accused of punching another woman in a row over a cab has turned down a plea deal and vowed to fight the case.
The Victoria's Secret and Sport Illustrated model who has been compared to Naomi Campbell in more ways than one apparently faces a misdemeanor assault charge.

White, who recently dated Oscar-winning actor Sean Penn and had previously dated actor Vin Diesel is accused of repeatedly punching another woman in the face over a cab outside Manhattan's Avenue Lounge last October.
She is also charged with harassment.
The plea deal called for White to perform two days of community service, attend two days of anger management and pay $446 in restitution