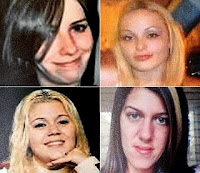 COULD the Long Island Serial Killers have two more names etched in their grim scorecard? Could be, according to the New York Post. Detectives now are looking at two more hooker murders--and maybe more--to see if there are any links between them and the 10 other bodies dumped on a lonely stretch of Long Island beach. Many of the dead bodies were prostitutes who worked through Craigslist.
One of the cases detectives are looking at or "reviewing" in police parlance, is that of Tanya Rush, 29, of Brooklyn. They are cryptically saying the grisly slaying as "possibly being involved." Rush's dismembered remains were discovered on June 27, 2008 and her


COPS in Maine are mystified as to the identity of a young boy found dumped on a rural road. He was found wrapped in a green blanket Saturday but so far cops aren't saying how he died or whether he was abused. So far they have logged hundreds of tips. The dump site is also where Jeffrey Curley, 10, was found dead inside a rubber container in 1997.
MORE DETAILS IN THE BOSTON HERALD

Posted by Crime Scene USA at 9:45 AM No comments: 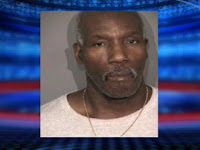 MEET FREDDIE YOUNG. Postal worker, lottery millionaire, hothead, killer. The 62-year-old Detroit man has been arrested in the vicious slaying of his daughter's Australian landlord.
Speaking for us all, Detroit homicide Lt. Dwane Blackmon said: "It didn't make any sense. I guess he just let his anger take over." Indeed, now Freddie has been arraigned for first-degree murder in the ridiculous murder of Greg McNicol, 45, who was shot to death May 7. McNicol had argued with a woman the Detroit News says is Freddie's daughter, who was about to be evicted.

METROSEXUAL mobster Vincent 'Vinnie Gorgeous' Basciano has been found guilty of a gangland murder that could land him in the hands of the executioner. The diva-like desperado ordered the killing to smooth his rise to to the top of the Bonanno crime family. Already serving a lifetime jolt for attempted murder, Vinnie G was also convicted of racketeering, conspiracy and a trucklaod of other charges. The former beauty salon owner was torpedoed by for Bonanno boss turned canary Joseph Massino. The well-groomed thug was portrayed the feds as "a cold-blooded remorseless killer."
Basciano orchestrated the killing of mob wannabe Randolph Pizzolo. The murder was payback for a drunken tirade by Pizzolo who demanded to be "made" a member of the crime family.
Read more »
Posted by Crime Scene USA at 9:05 AM No comments:

WHO is the headcase who gives Botox to her 8-year-old? The British press says she's Kerry Campbell, 34 but now there appears to be some doubt as to whether that's even her real name. And she doesn't even live in San Francisco as she claimed, according to the SF Chronicle. The paper said that city officials were bombarded with inquiries after "Kerry" went on Good Morning America to defend giving the kid Botox as a shortcut to winning beauty pageants (good God, we know.) Said she was a trained esthetician, kid's name was Britney. Seems no one--reporters or child welfare officials--can track this woman down. 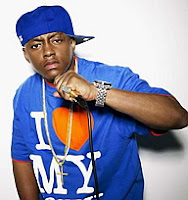 HE'S best known for rapping about criminal exploits on vinyl, but it appears Philly rapper Cassidy is now a suspect in a real murder.
The hip hop star whose real name is Barry Reese was taken in Saturday for questioning about one killing and two attempted murders in Philadelphia. He already had a warrant out on him for violating probation and was considered a "high risk" suspect as he was thought to be armed and dangerous. Cassidy who's most well-known single is 2005’s “I’m a Hustla,” which reached No. 8 on the Billboard R&B/Hip-Hop charts was followed by cops to a local convenience store, Lt Timothy Lloyd said and after being positively identified Reese: “the ERT units moved in and

SHE put her tiny daughter into the microwave and burned her for two minutes, killing her in a vicious crime that left even experienced officers sickened.
Worse still, it appears that China Arnold, 31, who could face the death penalty for the horrific crime, killed her 28-day-old daughter out of spite.
Prosecutor Dan Brandt told jurors Arnold put her baby, Paris Talley, in the microwave after a fight with her boyfriend adding that her actions were "even more purposeful" than a slaying with a gun or knife.
While medical experts testifying at the trial, the infant was likely in the device for more than two minutes before she died.
An police insider revealed: "This has been one of the hardest and saddest cases we've ever seen. Even experienced officers have been reduced to tears by the

THEY found his severed head in the trash, his arms strewn around the garden and a chainsaw near a bag with some more of Marlon Thomas's limbs near his Texas home.
And cops in Houston, TX believe it was his best friend Noe Morin, 32, carved his friend into tiny pieces using the deadly weapon.
"That's his best friend for over 20 years," said Thomas' devastated sister, Tonya Dangerfield told Fox News.
"Why did he do that? Why would you do something like this?"

SAMURAI NUT GETS 25 FOR NEAR BEHEADING

A SAMURAI wielding maniac who killed his stepfather while he slept has been jailed for 25-years for the "cowardly" attack.
Zachary Gibian, 24, who at one point blamed his own mother for the ghastly murder, admitted that he nearly beheaded retired NYPD cop Scott Nager as he slept on the couch, when he pleaded guilty earlier this month.
At one stage he also claimed that his stepfather sexually abused him, but he also recanted that story when he pleaded guilty to manslaughter.
An officer close to the case said: "This was a vicious attack on someone who was completely defenseless. It's clear that the pair had one or two issues but to kill him this way was completely cowardly.
"Scott was a great guy and a good cop, who had served his time on the force and deserved a long and happy retirement.