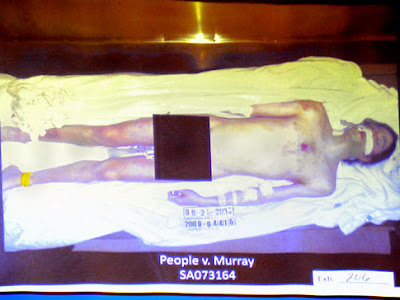 THE MANSLAUGHTER trial of Michael Jackson's doctor Conrad Murray was sent reeling today with a grotesque photo showing the emaciated and quite dead King of Pop on a gurney. CONRAD MURRAY TRIAL
Posted by Crime Scene USA at 7:21 PM No comments:

HAPLESS HORRORS! What's this, Seattle superhero Phoenix Jones in dance dilemma? That's what cops in the Northwest say. Apparently, our hero is fighting an assault charge for allegedly hammering a group of people with pepper spray. He says they were fighting. They say they were dancing. STAYYYYYY TUNNNNNNNNED.
Posted by Crime Scene USA at 7:37 AM No comments:

IT'S NOT often you're going to see this unless things get totally out of hand during Rumspringa but there you have it. Three Amish men in Ohio were busted for doing a barn invasion and cutting another Amish man's beard. Sam Mullet said he didn't order the hair-cutting but didn't stop two of his sons and another
Read more »
Posted by Crime Scene USA at 7:31 AM No comments: 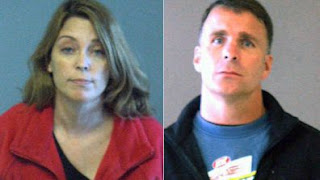 A TOP scientist at the Centers for Disease Control and Prevention in Atlanta faces child molestation and bestiality charges involving a boy, 6, cops say. Dr. Kimberly Lindsey is the deputy director of the CDC's lab science program. The 44-year-old brainiac was busted Sunday with her boyfriend Thomas Westerman. She's being held on a $25,000 bond. Westerman was released on bond.
Now, according to cops a medical professional ratted the depraved duo out. The couple allegedly molested the boy in January of last year and then again in
Read more »
Posted by Crime Scene USA at 7:16 AM No comments:

THERE SEEMS to be few crimes as twisted as deranged women who kill pregnant women, then try to carve out their fetuses.
But that's exactly what selfish Annette Morales-Rodriguez - who already had three children of her own - decided to do last week.
According to cops she was desperate to have a new baby with her boyfriend, but as the due date neared she panicked.
So she scoured the suburban Milwaukee neighbourhood for two weeks looking for a pregnant woman whose child she could steal and call her own. 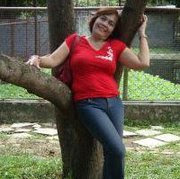 A SELF-CONFESSED swinger says she was invited on the Aruban sex trip with missing party girl Robyn Gardner but begged off. Gary Giordano--the man suspected of orchestrating Robyn's disappearance Aug. 2--had also invited Rebecca Toring for fun and games under the sun. Now, she tells the National Enquirer she's thanking her lucky stars. She said: "I just thank God I'm still alive. Gary invited me to Aruba, and if I had gone I would probably be dead now – just like poor Robyn."
Cops believe creepy Don Juan Giordano--a failed Maryland businessman--killed Robyn for the $1.5 million insurance policy he took out on her WE couldn't really tell but it looks like D A(note the cool skull) D. Either way, we're certain this fellow's parenting gifts are making a difference in this rough old world of ours.
Posted by Crime Scene USA at 6:25 AM No comments:

A PSYCHIC had been accused of theft by hex, after she allegedly scared a 12-year-old girl into stealing her family's jewelry.
Cops say Jackeline Lopez told the young girl that her family was cursed and that terrible things would happen unless that was removed.
The LA Sheriff's Department said in a statement: “Lopez allegedly conducted these psychic readings in her home’s garage which she had decorated with numerous candles, chalk outlines, black caldrons, replicated human skulls, beads, dolls, and other similar items consistent with psychic readings.”
Then she told the 12-year-old girl, who she met through her daughter that the only way to remove the curse was to steal more more than $10,000 worth of jewelry from her parents.

TIRED of his "lazy" son not doing his chores Antonio Gutierrez allegedly took some drastic action and attacked him with a four-foot-long sword, cops say.
Cops say he confronted his 18-year-old son, John, "about being lazy and not doing chores around the house."
But when the argument escalated, the 43-year-old father armed himself with with the weapon and "confronted John with the sword," according to the police statement.
It goes on to say: "John tried to defend himself by using his hands to ward off the sword," and as a result the teen suffered lacerations and needed medical attention.

A JILTED boyfriend repeatedly assaulted his girlfriend after kidnapping her and holding her hostage in her own home for two months. Mad Eric Bernard Barney Jr had dated the woman for just five months, when he viciously tried to kill her by strangling her and smothering her with a pillow.
But although cops got an arrest warrant they couldn't find the crazy 31-year-old and just four days after the vicious attack, the woman faced a horror movie scenario.
Two days later, while she was sleeping Barney let himself in with a key she didn't know he had, telling her he wanted to talk with her and apologize.
But the woman said when she told Barney he couldn't stay in her house, he replied: "I can do whatever I want, and I'm not leaving you, ever."