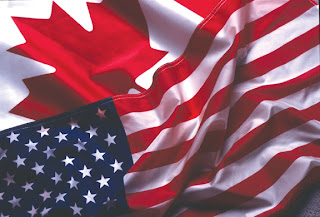 TODAY MARKS the kickoff of holiday weekends in both the United States and Canada. So, as a result we'll be posting but very lightly. We're back to normal on Tuesday.
Posted by Crime Scene USA at 9:54 AM No comments: 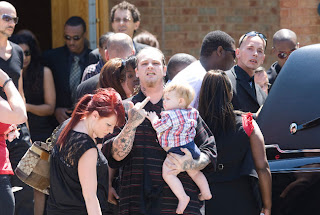 YEP. There's meatheads in the Great White North too! Even on Canada Day. Dude with the finger, clearly knocking hell out of life's ballpark was attending the funeral of Cory 'He's Turning his life Around' Armstrong, 21, gunned down in a police dope raid. Old story: I fought the law. The law won. Happy Canada Day! TURNING HIS LIFE AROUND
Posted by Crime Scene USA at 9:49 AM No comments:

RILEY Choate's DNA is being sought by prosecutor's working on the horrific murder of his 13-year-old son. Christian Choate's battered body was found in a shallow grave near his home on the Gary, IN, trailer park where he was allegedly kept in a dog cage and horribly abused by his father and stepmother Kimberly Kubina.
The tragic 13-year-old wrote "I want to die" in a diary, within weeks of his tragic life being cut short.

A CITIZEN'S cane helped cops track down a pair of purse snatchers after she used it to whack their car when they made their getaway.
Cops in New Castle, PA, said the dents left in the car by the 89-year-old woman helped them track down the vehicle and bust the crooks.
Police Chief Thomas Sansone says the 89-year-old and her 82-year-old friend were accosted outside a pizza shop Sunday, by 27-year-old Jerry Brown Jr who grabbed the purse.

SHE PROMISED him kinky sex and handcuffed him to bed, but then when Sabrina Renee Robinson had him where she wanted him she turned violent and took heavy revenge for him cheating on her.
Smashing him in the face with the butt of a shotgun, she repeatedly threatened to kill him, and promised to "gut him like a deer."
Needless to say, her 41-year-old fella, who later admitted his infidelity to cops, might think twice before he cheats again.
Madera County Sheriff’s Department spokesperson Erica Stuart told

THE KNIFE wielding thief who left Paris Hilton "terrified" when he tried to break into her LA pad has been sentenced to two-years behind bars.
Armed with two deadly blade Nathan Lee Parada banged on her window as he attempted to break in, but he was foiled by the celebutard's then boyfriend, baseball player Cy Waits, who stopped him before he could get in, by holding him at gunpoint.
At the time the star tweeted: "So Scary, just got woken up to a guy trying to break into my house holding 2 big knifes. Cops are here arresting him."

FORMER mob king pin James 'Whitey' Bulger is to get a public defender for his multiple murder trial, because he can't afford to pay for his own lawyer, a court ruled yesterday.
Despite being caught with more than $800,000 in cash, when his Santa Monica apartment was busted last week, the taxpayer will fund his defense.
His provisional attorney Peter Krupp, said authorities have seized all of Bulger's assets as the proceeds of illegal activity, leaving him with no way to pay for his defense.
And although prosecutors argued that his family including his brother and former Massachusetts Senate president, William Bulger could pay, he said no relatives had come forward and offered to help him financially.

CASEY ANTHONY 'TOO UNRELIABLE' FOR THE STAND

CASEY Anthony's defense lawyers spent hours deliberating whether to put her on the stand but ultimately decided against allowing her to testify because she was "to unreliable."
A insider close to the legal team, led by Jose Baez said they thought long and hard and spent hours training their client for  possible last minute testimony, they felt that she may jeopardize their case too much if allowed to speak.
When the defense announced that they were going to be resting their case without putting Casey on the stand Judge Belvin Perry took a moment to ask the Florida mother if it was her decision not to testify.