IT PROBABLY wasn't the best way to make a good impression on the family court judge.
Melissa Hardwick continually interrupted proceedings as her ex-husband explained why he'd filed a domestic violence complaint against her.
So Judge Jennifer Edwards warned her that she would be held in contempt if she carried on talking.

PERVERT PEDIATRICIAN MADE 'HOW TO' MOLEST BOOK 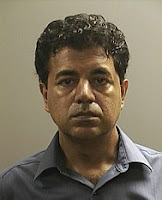 A PERVERT pediatrician accused of videotaping himself while he sexually abused young female patients made a "how-to-book" on molestation called "Sex" cops say. Dr Rakesh Punn allegedly drugged his victims, some of whom were as young as 11, and blindfolded them during the assaults.
Nassau County District Attorney Kathleen Rice has said most of Punn's patients were Indian and that as a physician he held a revered position in that community, where parents would trust him to examine their children in private. She added that after making them strip, he blindfolded them and placed them on the examining table, often giving them a sedative to knock them out. He would then videotape or photograph his sexual contact with them. In many instances, Punn would give the girls a sedative to render them