GERALD CHRISTOPHER TERRIFIED BEFORE HE VANISHED

GERALD CHRISTOPHER doesn't look like the kind of guy who scares easily. Standing 6’4 and at over 200lbs – he had an imposing presence. Yet, in the days before his disappearance, Christopher was seriously spooked. The Philadelphia-area personal trainer told his fiancé that they were in danger, and that they should flee the country.
His behaviour became even stranger when, at a friend’s barbeque, he was introduced to a woman who for an unknown reason caused him to freak out. After shaking her hand he ran to his car and sped away, according to his fiancé Roxy Merat. Two days later – he’d disappeared – sneaking out of his apartment leaving his keys, wallet and cell.
Radnor police said that Christopher (known to friends as ‘Chris’) does not have 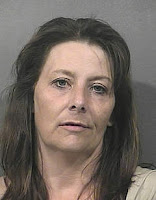 AN INDIANA WOMAN is facing a long stretch behind bars and a nomination for ‘dumbest criminal of the year’ after stealing a police car while being arrested for prostitution, cops say. Cara Ann Moynihan, 42, was ordered out of the bunk area of a parked semi after an officer responded to a call of a prostitute in the parking lot at Flying J. What were you doing in there, Cara? Moynihan was cuffed and put in the back seat of a cruiser. However, while speaking to a trucker, Moynihan squirmed into the front seat of the car and sped away.
Another officer saw the car pull into a nearby truck stop where witnesses saw a woman running with a set of handcuffs dangling from one wrist. When officers caught up with Moynihan she refused to obey their commands and

ARE there finally answers in the unsolved slaying of rap superstar Tupac Shakur in 1996? A convicted killer has now stepped forward to claim responsibility for the 1994 robbery and shooting of Shakur and that it was done at the behest of hip hop impresario James "Jimmy Henchman" Rosemund. He says he did the hit for $2500 and bling.
Dexter Isaac, 46, told AllHipHop he wanted to make amends: "I want to apologize to (Shakur's) family and for the mistake I did for that sucker (Rosemund). I am trying to clean it up to give (Shakur's and

COPS in Indiana searching for clues in the bizarre disappearance of co-ed Lauren Spierer have released a video in hopes of finding the pretty blonde. They are also seeking information on a truck spotted in the area. The Westchester, New York university student vanished off the streets of Bloomington two weeks ago after a night of partying.


Posted by Crime Scene USA at 8:54 AM No comments:

BARMY Bonnie Sweeten who staged a hoax kidnapping of her and her nine-year-old daughter and then went to Disney World looks set to plead in the $700,000 fraud case.
Back in 2009, Sweeten, a mother of three gained national attention when she claimed that a couple of black men were holding them hostage.
In fact, she was on her way to Florida using a fake identity to party with Mickey and Minnie.
Cops caught up with the mad mom in the theme park and took her back to Philadelphia, PA  where authorities were investigating allegations that she had stolen $700,000 from clients of a Feasterville law firm, where she worked as a paralegal.

ATLANTA Falcon Christopher Owens smashed up his ex-girlfriend's apartment and doused her most valuable possessions in bleach, cops say.
The crazed cornerback  barged into the mother of his nine-month-old son, La Tia Terry's apartment and started smashing it to pieces, after the pair rowed about custody of the child.
According to the police report he punched holes in the wall, destroyed expensive electronics and broke the baby's crib.

CASEY Anthony's judge has denied a defense request to have the case against her thrown out of the Orlando court.
Defense attorney Cheney Mason blasted the prosecution's case which ended Wednesday morning, telling the court that the prosecutors had failed to show a murder had taken place.
He said: "There is no evidence to establish when the child died, where she died, how she died, or if anyone was in attendance when she died."

JORAN VAN DER SLOOT IS GOING TO BE A FATHER????

DOUBLE murder suspect Joran van der Sloot is going to be daddy after getting his new girlfriend (yes we're wondering how too) pregnant behind bars, according to reports.
The prime suspect in the disappearance Alabama teen Natalee Holloway is currently in Peru's, Miguel Castro Jail awaiting trial for the murder and robbery of Stephany Flores in June 2010.
But that hasn't stopped the creepy Dutchman getting himself a new girl - who has not been identified - who has been visiting him in the Lima jail to do "chores" and bring him candy, according to the Atlanta Journal Constitution.

AL QAEDA have selected their longtime number two to become public enemy number one.
As we reported here there were a number of candidates to fill the power vacuum left by the death of terror chief Osama Bin Laden, but now Ayman al-Zawahri has been chosen to lead them according to a statement posted Thursday on a website affiliated with the network.
The son of an upper middle class Egyptian family of doctors and scholars, his father was a pharmacology professor at Cairo University's medical school and his grandfather was the grand imam of Al-Azhar University, a premier center of religious study.