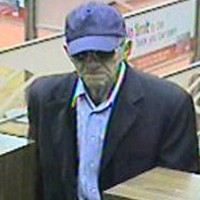 ﻿﻿﻿﻿﻿HE MIGHT be old, but that hasn't stopped the elderly bank robber dubbed the "geezer bandit" from needing a calender. Quite how the brazen thief, wanted in more than six heists will know which financial institution to rob next is unclear.
But investigators are now forensically examining a day planner that the thief dropped on their last job at a Bank of America in San Luis Obispo, CA.
During the robbery, a teller placed some cash and red dye in a bag, which the suspect placed in his day planner before running off.
Capt. Chris Staley of the San Luis Obispo police told CBS LA: "I think the shock of the dye pack actually exploding in the bag created a diversion enough for him to obviously drop both the money and the other items that he was carrying. 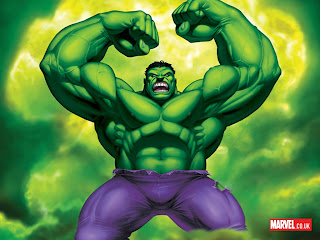 HULK SMASH!
But instead of radiation from a gamma bomb, I think we can safely put this one down to roid rage.
Cops say that naked, 300lb, bodybuilder, Ruben Azru vicously attacked a couple in their San Bernadino, CA, home.
Officers explained that the couple arrived home to find the nude muscleman on their front porch, but whe the 35-year-old husband confronted him, Azru exploded and began pummelling the guy.
Colton police Cpl. Ray Mendez told the San Bernadino Sun: "The suspect violently attacked the husband, causing major head trauma and injuries.

THOU Shalt not touch young boys.
A perverted youg Bible camp teacher sexually abused and sent saucy text messages to a 13-year-old boy she met a Christian study group.
Heather N. Daughdrill, 28, became infatuated with the youngster when she was teaching him about the good book and cops say she had "innappropriate sexual contact" with him between June and October this year.
Officers claimed she would pick him up from school without his parents knowledge and take him off for the saucy sex sessions.
Detectives also discovered as series of explicit text messages between the pair, according to The Town Talk.
A police source revealed: "There were a few shocked faces when we realized just what had been going on between the pair."