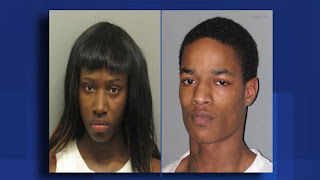 CHICAGO COPS have arrested a man and woman and charged them with first-degree murder in the slaying of a pregnant teenager. Cops say Deandre Minkens, 20, and Shante Thomas, 19, murdered Rosemary Newman, who was nine months pregnant with a baby girl. The gruesome twosome are also charged with the intentional homicide of the unborn child.
Newman went out with a friend Saturday night and never came home. She was found in a forest
Read more »
Posted by Crime Scene USA at 9:47 AM No comments:

THE MYSTERY of Maine mom Krista Dittmeyer just got deeper. An autopsy Thursday proved to be inconclusive as to her cause of death. Toxicology reports could take up to eight weeks.
Dittmeyer's body was recovered from a pond at a New Hampshire ski resort Wednesday. The 20-year-old single mom who worked as a waitress eerily disappeared last Saturday, her Nissan Sentra running, the front door open and her 14-month-old baby, Aliyah, sleeping in the back seat. The child is safe but cops believe Dittmeyer may have been 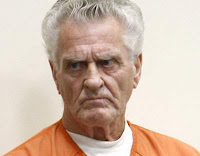 AFTER MORE than four decades a serial killer who slithered through legal loopholes will be going to jail forever. Creepy Nolan Ray George was convicted Thursday of first-degree murder in  the 1968 slaying of Gwendolyn Perry, 36, of Pontiac, Michigan.

The 67-year-old serial killer--believed responsible for scores of murders in the Midwest--glared at the jurors as they confirmed his reign of terror was over. George had earlier served 12 years for the 1969 slaying of Frances Brown, 22, and another 10 years for the murder of Cindy Garland Rose, 22.

A MEXICAN actresses greatest ever role was pretending to be a happily married woman prosecutors say.
Gorgeous Fernanda Romero admitted she lied during an immigration proceeding when describing her marriage to musician husband Kent Ross and was sentenced to 30 days in jail. The 28-year-old starred in "Drag Me To Hell" but she is best known for her role in "Eternamente Tuya" the huge Mexican soap opera.
But she'll swap her glad rags for prison regs for the next month, even though she expected to avoid serving time as a result of plea bargains in the case.
However, U.S. District Judge Manuel Real noted the seriousness of the crime and ordered both to start serving their sentences on weekends beginning in June.
They will also serve five years' probation.

A LIGHT fingered Roman Catholic priest who helped himself to more than $1 million worth of church cash which he spent on male escorts and a lavish lifestyle, has been sentenced to three years behind bars. Rev Kevin Gray cruised gay bars decked out in Armani clothes, while posing as a kindly, caring, humble parish priest in Hartford, CT. He was also paying $2000 a month rent for a small apartment on New York’s Upper East Side which he shared with a man he met in Central Park in 2005.

He also paid for the man to attend Harvard University, bought him a

A VICIOUS group of kids broke into school and tortured a beloved school hamster to death. A group of five boys between the ages of 11 and 14 left a terrible trail of destruction behind them as they vandalized classrooms at the Northwest Prep School in Santa Rosa, CA.
They turned over and refrigerator, broke windows, tore up a vegetable garden and tagged the walls with graffiti before turning on the helpless beast. Sgt. Mike Raasch would only say, "It was bad. They did three different cruel things to it."
A woman playing volleyball at the school called 911 and helped identify some of the suspects, authorities say.
The two 11-year-old boys were reportedly arrested on suspicion of felony vandalism and released to their mothers while the 13-year-olds and a

Read more »
Posted by Crime Scene USA at 6:27 AM No comments:

A MODERN day Romeo and Juliet have gone on the run from their families who tried to split them up.
Cops are desperately hunting star crossed lovers 17-year-old Nicole Dones and her boyfriend Wayne Powell, 18, who went missing almost two weeks ago.
Nicole's father Angel, admitted to The Miami Herald: ""We were trying to keep her away from him,"
While Powell's father, also Wayne told the paper he  had been trying to get his son to "back off a little bit," because his performance at school had suffered.

JAILBIRDS TO CHATLINE KILLER: "YOU'RE DEAD"

THE man dubbed the "Chatline Killer" because he allegedly met his victims on telephone chatlines has been forced into prison protective custody because he "felt threatened" by other inmates.
Furious at finding out about his crimes fellow prisoners have made Sonny Pierce a marked man behind bars, forcing authorities to take action to protect him.
A prison insider revealed: "He'd not really told people why he was in, so when the other prisoners found out they were furious. If they could get to him he'd be dead.
"There is no one lower than sex criminals in jail, especially ones that attack kids and his victims were basically children."