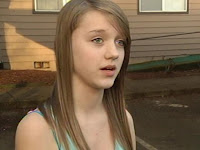 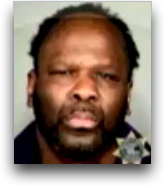 A HERO OREGON dad pummeled a convicted sex fiend saving his teen daughter from what may have been unspeakable horrors. Shelby Harrington, 13, was walking home from school Thursday in Milwaukie when Douglas Quinn approached and asked her name. Quinn then grabbed her shoulder and the quick-thinking teen made a run for it--and called her dad. Her dad found her and they began looking for creepy Quinn.
She said: “I didn’t know what to think. [Was] he was going to have a car come around the corner or what? My first instinct was just to run and call my dad."
Good call. And dad Brett Harrington made a good call too. “I grabbed him, body slammed him and put him in a nice headlock and waited till the deputies showed up,” Brett told Fox12 News.
Quinn, a registered sex offender, was booked into jail on a drug warrant.
The Clackamas County Sheriff’s Office says that based on the information they had, they were only able to cite Quinn for harassment. The Harringtons are hoping Quinn will face more serious charges.