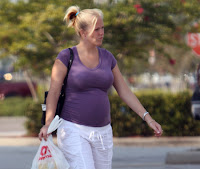 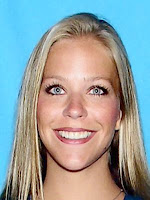 FLORIDA party teacher Debra Lafave is pregnant with twins, according to tabloid reports and the St. Petersburg Times. According to the Times, the notorious teacher--who pleaded guilty to having sex with a 14-year-old boy in 2004 while she was a teacher--has even registered at Target with announcement "TWINS!!!". Lafave was sentenced to three years of house arrest, followed by probation, but avoided prison. The blonde bombshell made headlines around the world for her hormone-
charged hijinks that including blowing the young fella while his buddy drove her vehicle. Cool. Now, she's expecting twin boys with a due date of Oct. 13. She now lives with her fiancee Shawn Haverfield and is apparently trying to move on with her life.
At the time of her trial, her attorney said she was too pretty to go to jail and would be preyed upon by gangs of roaming lesbian prisoners. Or something like that.
Posted by Crime Scene USA at 9:43 AM