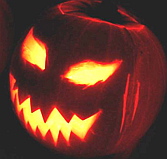 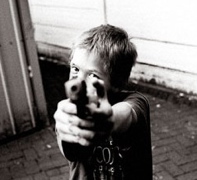 SHE really did get a fright on Halloween.
A 10-year-old trick or treater pulled a pistol on a woman after she joked that she'd steal his Halloween candy.
The woman told cops that she'd recognized one of the youngsters from her Aiken, GA, neighborhood and jokingly told them she would take their sweets, according to the police incident report.
But the youngster clearly wasn't amused and according to Aiken Public safety Lt David Turno, he said, "No" and pointed the handgun at her.
Turno told The Augusta Chronicle  that the gun wasn’t loaded but the boy had a clip of ammunition.
He was taken to the police station and was turned over to his parents.
Amazingly the boy's brother, who is also 10, told officials he also had a gun and both weapons were recovered by police.
The boys told cops they got them from their grandfather without his permission.