JAY ROSENBAUM ON LAUREN SPIERER: 'I DIDN'T DO IT' 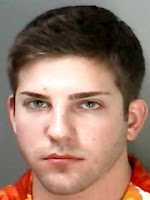 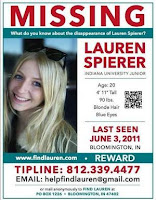 THE LAST person to have seen missing University of Indiana co-ed Lauren Spierer now says he had nothing to do with the pretty blonde's disappearance. IU student Jay Rosenbaum is also claiming he has cooperated fully with police from the very beginning. Spierer--a Westchester, New York native--disappeared June 3 after a night of heavy partying in Bloomington. She has not been since and cops are continuing to unravel a truckload of conflicting statements. Rosenbaum said he met with Spierer's parents and a private detective for about
two hours, answering all their questions.
He told the Westchester Journal-News : "Yes, I have cooperated since day one, and I will continue to cooperate. And I had nothing to do with the disappearance of Lauren. Obviously, there's nothing more that I want than for Lauren to be found and safe, and for this all to be over." MORE ON LAUREN SPIERER
Posted by Crime Scene USA at 8:23 AM