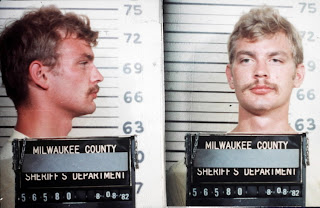 TRACY EDWARDS was the one who got away. Invited to cannibal serial killer Jeffrey Dahmer's house in 1991 to drink beer and watch The Exorcist, Edwards got creeped out and called the cops ending the maniac's reign of terror. By the end of Dahmer's murder spree, he had murdered and dismembered and eaten 17 victims. Now, Edwards, 52, has been arrested and charged with murder of man who was thrown to his death from a bridge in Milwaukee last summer. He faces 60 years in jail.
His defense lawyer Paul  Ksicinski said: "It's like
Humpty Dumpty. It's like he was never able to put the pieces back together again."
Edwards was seen standing on a bridge over the Milwaukee River with two other homeless men, Timothy Carr and Jonny Jordan. A witness saw Edwards and Carr push Jordan some 20 feet into the river below and called the cops. By the time help arrived, Jordan had drowned, police said.
As for Dahmer, he was beaten to death by a fellow inmate in 1994.
DAHMER HERO FACES JAIL
Posted by Crime Scene USA at 7:30 AM